Trading volume was moderate at about 908 million shares worth some 11 trillion won (US$9.6 billion), with losers outnumbering gainers 622 to 240. 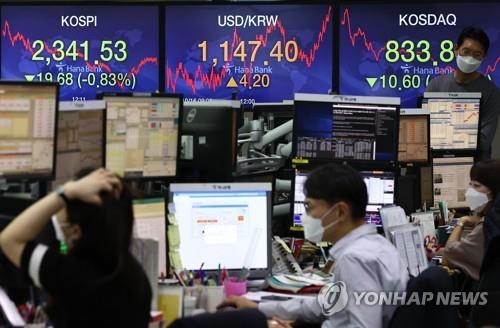 The fall came after the overnight Wall Street losses that stemmed from a continued hike in new COVID-19 infections in the United States and Europe.

Amid the spreading virus woes, the Dow Jones Industrial Average went down 0.07 percent to close at 28,494.2 on Thursday (New York time), with the Nasdaq Composite and the S&P 500 dipping 0.47 percent and 0.15 percent, respectively.

"The recent jump in the COVID-19 toll (in the major economies) is dampening investor sentiment in the global financial markets," said Kiwoom Securities analyst Seo Sang-young.

"Investors seem to be worried that the strained global economy may pull down South Korea's exports," he added.

Big Hit Entertainment, the management agency of K-pop phenoms BTS, plunged 22.29 percent to 200,500 won on the second day of trading.

The local currency closed at 1,147.4 won against the U.S. dollar, down 4.2 won from the previous session's close.

Bond prices, which move inversely to yields, closed lower. The yield on three-year Treasurys rose 1.1 basis points to 0.888 percent, and the return on the benchmark five-year government bond added 1.5 basis points to 1.178 percent.