SEOUL, Oct. 18 (Yonhap) -- A number of South Korean companies are in the process of going public in the fourth quarter this year, in a bid to ride on the latest successful initial public offering (IPO) rush, data showed Sunday.

After suffering a pandemic-caused market crash in the first half, the local stock market rebounded to the pre-pandemic level, wooing more firms to tap the IPO market during the remainder of the year.

Some mega-scale deals, such as Kakao Games and Big Hit Entertainment, raised some tens of trillions of won in subscription deposits from retail individuals, adding vigor to the local IPO market.

The IPO rush has still not lost its steam, according to the data compiled by the Financial Supervisory Service (FSS).

A total of 18 companies has filed for initial public offerings by the end of November, FSS data showed. 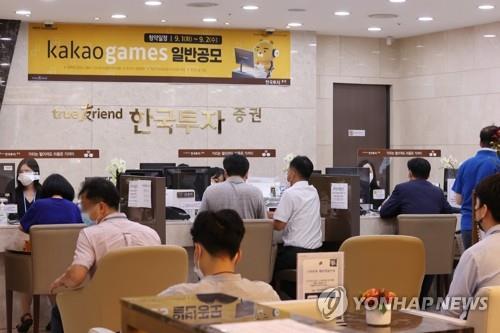 Details about Krafton's IPO have yet to be unveiled, but market focus is already on whether its share sale will attract more investor money than the three predecessors.

The fourth-quarter IPO season kicks off with biotech firm PeopleBio Inc., set to be listed on the KOSDAQ on Monday. Health care bio firm MiCo BioMed will hop from the third-tier KONEX to the secondary KOSDAQ on Thursday.

AI-focused firm VAIV Company and gas sensor developer Senko are also set to be listed on the KOSDAQ market by the end of this month.

Kyochon F&B, a giant fried chicken franchise, will be listed in November, according to the data.

Despite an upbeat mood for IPO stocks, experts warned that the IPO stocks may not turn out to be lucrative as investors had hoped.

Half of the 11 stocks that were listed after early September have dipped to below their IPO prices as of Friday, they said.

"The behemoth-level listings may have invigorated the IPO market, but clearly, not every one of them ended up with gains," Na Seung-doo, an analyst at SK Securities, said.