In the annual budget speech Wednesday, Moon plans to request bipartisan support for his administration's fight against COVID-19 and campaign to revitalize the economy. The government has proposed a state budget worth 555.8 trillion won ($469.8 billion) for 2021, up 8.5 percent from this year. Lawmakers will begin a full-fledged review of the budget scheme within the coming weeks.

During the address, Moon will emphasize that South Korea is a country which is "strong in crises," Cheong Wa Dae spokesman Kang Min-seok told reporters. 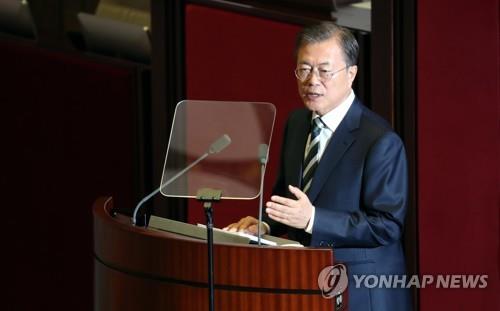 He added the president will express his gratitude to South Koreans over their support for antivirus measures and unveil a fiscal operation scheme to succeed in efforts for virus control and economic growth.

Moon is expected to explain the Korean-version New Deal project aimed at creating jobs and developing the nation's future growth engines in preparation for the post-coronavirus era.

He is also likely to present his vision for inter-Korean peace.

Moon made his previous parliamentary speech on July 16 on the occasion of the opening of a new four-year National Assembly session.