In his parliamentary speech on the state budget, Moon assured lawmakers that the government would create a record high budget, proposed for 2021, with a focus on creating jobs, reinvigorating the economy and winning the fight against the coronavirus. His administration has drawn up a 555.8 trillion-won (U$469.8 billion) budget bill, a 8.5 percent hike from this year.

"It's time to operate full-scale measures to invigorate our economy to put it on a normal track starting next year," he said during the annual address at the National Assembly. 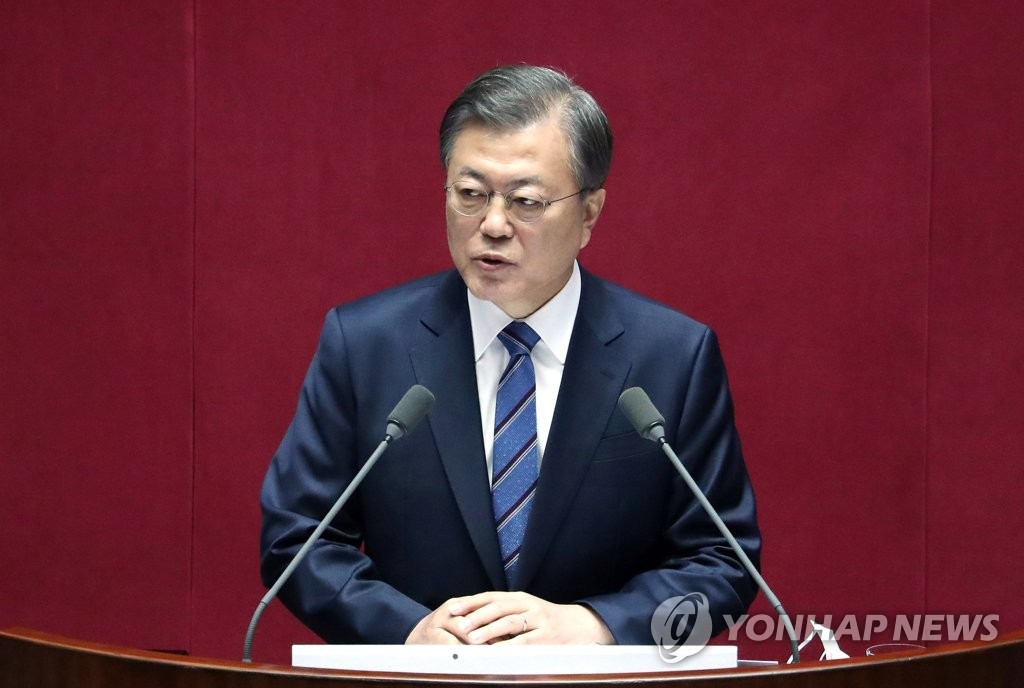 He described a clear economic recovery and a win in the antivirus fight as "two rabbits" that South Korea should catch at the same time without fail.

"First, (the government) will put its priority on a quick and strong economic recovery," Moon said regarding the direction of the government's fiscal operation plans.

He emphasized the importance of maintaining and creating jobs, saying it is a starting point for an economic recovery, as well as the most important issue associated with people's livelihoods.

He cited the Korean version of the New Deal aimed at transforming the nation into a "pacesetting" economy via job creation and the development of future growth engines, especially in digital and environment friendly sectors, a project to cost a total of around 160 trillion won.

Moon said South Korea is proving to be a country "strong in crises," as it has done better so far in both virus control and economic stimulus than many other countries.

South Korea's economy, the fourth largest in Asia, grew in the July-September period mainly on a rebound in exports after having contracted for two consecutive quarters, according to the Bank of Korea.

With the easing of social distancing restrictions, Moon said, conditions for reviving consumption and domestic demand are being created.

He said the government will foster consumption via various policy steps, like the distribution of discounted gift cards and coupons, and that it will spare no effort to support the domestic tourism industry and local economies.

The president stressed the need to continue expansionary fiscal policies, but he pledged no negligence in efforts to maintain fiscal soundness apparently through a "bone-cutting" restructuring of budget expenditures.

Moon, meanwhile, made clear that his liberal administration remains determined to curb real estate speculation amid soaring prices of houses, as well as rents and down payments, called "jeonse" here.

The government will push for the supply of new houses as planned and "certainly stabilize the jeonse market" by enforcing newly enacted relevant laws with stability and expanding the provision of "good quality middle-sized public-lease apartments," the president said.

Many say there is a shortage of apartments for families with kids largely in Seoul and nearby metropolitan areas. The Moon government is said to have placed more emphasis on providing youths and single-person households with affordable rental housing.

Critics also argue that the hasty introduction of three jeonse-related laws has led to a "distorted" market and sharp increases in jeonse prices.

Moon also requested bipartisan support for the passage of major pending bills, including those on promoting a fair economy.

The government is seeking to revise the commercial law and fair trade law and enact the financial group supervision law. Conglomerates here, however, are concerned that the legislation, if introduced, would restrict their managerial rights and some business activities.

Moon asked the parliament to "put an end to a delay" in the plan to launch a non-prosecution agency tasked with investigating corruption among high-ranking government officials.

The law on the body, provisionally named the Corruption Investigation Office for High-ranking Officials (CIO), took effect in July. But the CIO has yet to be born, as the ruling and main opposition parties are locked in wrangling over the selection of its chief.

Establishing the unit is a core part of the Moon administration's campaign to reform the state prosecution service accused of having excessive power. 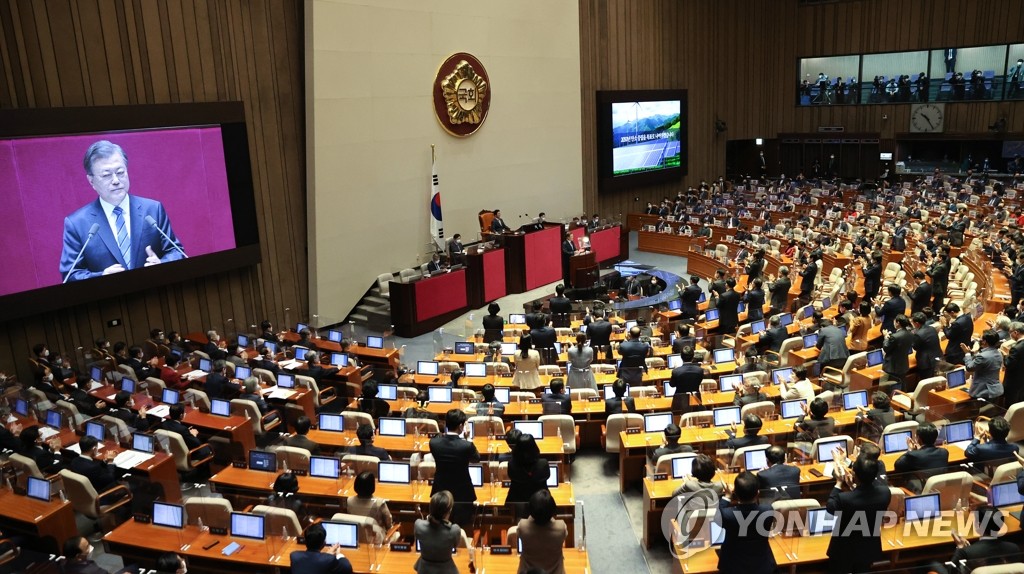 On North Korea, he vowed an "incessant" push for dialogue to achieve the denuclearization of the peninsula and lasting peace on the basis of a strong national defense posture.

The past 3 1/2 years were a challenging time to remove the threat of war from Korea and change it into a peninsula of peace and prosperity, he said.

Despite a lot of progress in peace efforts, he pointed out, dialogue has been suspended once again, and there was a recent incident of a South Korean national being fatally shot by the North Korean military in the Yellow Sea.

Moon said the government will strive to reveal the truth behind the case in a transparent and responsible manner.

"On the one hand, it has become a chance to confirm the urgency of a peace regime," he added, expressing hope for the two Koreas to explore ways for co-existence with a "community for life and safety."

The president used the expression to suggest that the two sides cope jointly with natural disasters, the coronavirus and other infectious diseases.

But the North remains unresponsive to Moon's repeated public overtures.

"Overcoming barriers lying in front of us, one by one, we should move toward peace even if it takes time," he stressed. "I expect that the South, the North and the international community will leap over obstacles through dialogue and trust and broaden peace from the Korean Peninsula to Northeast Asia."