WASHINGTON, Oct. 28 (Yonhap) -- North Korea's denuclearization would bring prosperity to the communist country, instead of the collapse of its regime as feared by leader Kim Jong-un, the top U.S. security adviser said Wednesday.

National Security Adviser Robert O'Brien said that was the vision President Donald Trump tried to lay out for Kim, for which he insisted the U.S. leader deserved praise.

"There is a lot of concern on the North Korean side that if the Kim family gives up their nuclear weapons, it could be the end of the regime," the White House adviser said in a webinar hosted by a Washington-based think tank, the Hudson Institute.

"So, when you are asking a counterpart in negotiation to do something that could result in their demise, that's a, you know, that's a very difficult negotiation to have," added O'Brien. 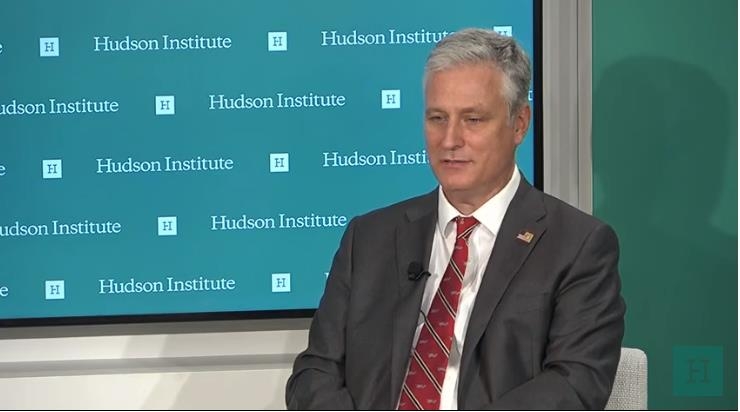 The national security adviser was reacting to a question that the Trump administration's failure to completely rid the North of its nuclear weapons may be viewed as its weakness or problem.

O'Brien argued Trump has achieved what no other U.S. president had been able to over the past three decades.

"Now, the results of the various meetings -- Singapore and Hanoi... and the brief meeting at the DMZ -- is that we have not had a test for long-range intercontinental ballistic missile by North Korea since Singapore. We haven't had a nuclear test since Singapore," he said, referring to the first Trump-Kim summit in the Asian country in June 2018.

The two leaders met again in Hanoi in February 2019 and at the Demilitarized Zone in June later that year, but their talks have stalled since.

North Korea has maintained a self-imposed moratorium on nuclear and missile testing since November 2017.

"Instead, the standard that the president is held up to is, 'Well, he didn't get rid of all the nuclear weapons in North Korea. Chairman Kim did not live up to his commitment,'" he said at the virtual seminar.

"Well, that hadn't happened for 30 years of President H.W. Bush, (Bill) Clinton, W. (Bush), President (Barack) Obama. It didn't happen under any of them," he added.

What Trump has accomplished with North Korea can be partly attributed to his maximum pressure campaign, but also his new vision for the impoverished North, O'Brien noted.

"What the President tried to paint for Chairman Kim, for the North Korean people, is an alternative vision....that the nuclear weapons are not going to bring you prosperity. They're not really going to even bring you security," said he. "But if you get rid of your nuclear weapons, the potential for North Korea is limitless."

That North Koreans were able to create nuclear weapons and long-range missiles despite years of sanctions proves that they are smart, hardworking and creative, O'Brien said.

"If they channeled that into real economy, North Korea could be rich. It could be very prosperous and Chairman Kim could then, rather than being deposed, he could be viewed as someone who has brought peace and prosperity. That's the vision that we've attempted to lay out," he added.