SEOUL, Nov. 3 (Yonhap) -- K-pop superstar BTS has hit the top 10 on a Billboard radio airplay chart for the first time with its mega-hit single "Dynamite."

The septet's first English song rose two notches to place ninth for this week on the Pop Songs radio chart to be updated on Tuesday, according to Billboard on Monday (U.S. local time)

The chart is one of the radio airplay charts of Billboard, measuring total weekly plays of the top 40 songs on some 160 mainstream radio stations.

It is the highest ranking on a Billboard radio chart achieved by BTS, outnumbering its last year hit "Boy With Luv" reaching 22nd on the Pop Songs list.

Also, "Dynamite" is the highest-charting song ever for a K-pop artist. The previous record was set in 2012 by rapper Psy's "Gangnam Style" when it finished 10th.

Since its debut at No. 1 on the Billboard Hot 100 chart based on airplay, album sales and streaming, "Dynamite" had been in the top 10 of the main singles chart for nine straight weeks. It, however, slipped out of the top 10 list this week for the first time since its release. 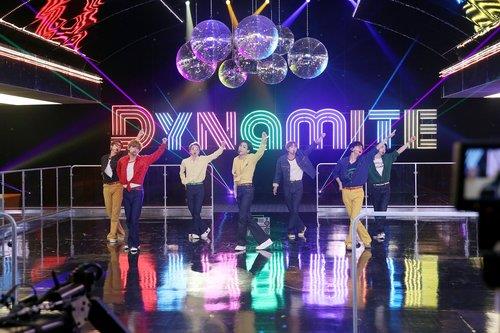