SEOUL, Nov. 22 (Yonhap) -- The U.S. Forces Korea (USFK) decided not to issue its annual Korean Peninsula security report this year as it has to cope with the coronavirus pandemic and other challenging matters, officials said Sunday.

The USFK, along with the United Nations Command and the Combined Forces Command, has issued the annual publication, titled "Strategic Digest," which provides major developments on the Korean Peninsula with regards to military and the bilateral alliance issues, such as North Korea's missile and nuclear capabilities.

"Due to other competing priorities, such as COVID-19, SMA furloughs and the ROK-U.S. alliance, we have made the deliberate decision to not publish the Strategic Digest this year," a USFK official said in a statement.

SMA refers to the Special Measures Agreement (SMA) that stipulates how much South Korea pays for the upkeep of the 28,500 American troops in its country. Amid prolonged negotiations, the USFK put more than 4,000 Korean workers on unpaid leave for months earlier this year.

USFK has also been working hard to stop the spread of the new coronavirus among its service members and related population, as it has continued to report patients mostly among those who arrived here from their home country.

The last version, which was published in July 2019 and was available for media, carries the U.S. military's first official assessment of the North's Hwasong-15 intercontinental ballistic missile (ICBM). The missile that Pyongyang test-fired on Nov. 29, 2017, has an estimated range of 8,000 miles, or 12,874 kilometers, which is "capable of striking any part of the continental U.S.," according to the 2019 Strategic Digest. 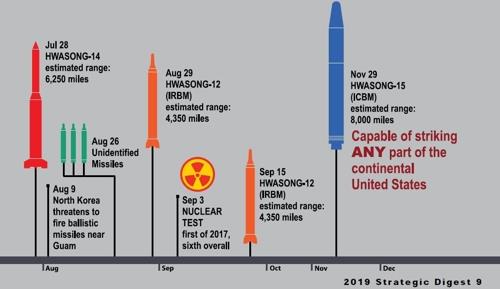