SEOUL, Nov. 21 (Yonhap) -- He was playing in a tie game in the South Korean baseball championship series on Friday. The other team was bringing in a new pitcher as he was waiting on deck.

Through all this, Doosan Bears' shortstop Kim Jae-ho was so relaxed he spent a few minutes chatting with his children in the stands during that pitching change. 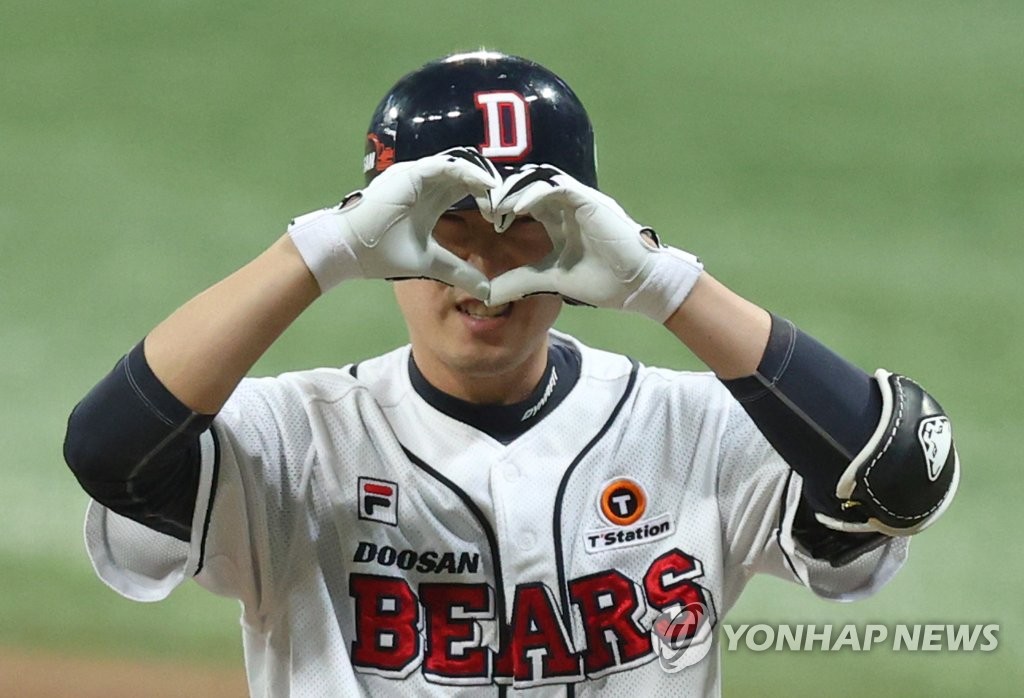 In the seventh inning of Game 3 of the Korean Series against the Doosan Bears, the 35-year-old veteran posed for photos as his son held up his smartphone, and bumped fists with his daughter through the backstop netting.

A few minutes later, their daddy went out and delivered a tiebreaking single. It gave the Bears a 7-6 lead, and hung on to win by the same score.

One small step for the baseball team. One giant leap for all fathers.

As Kim headed toward first base, he pointed toward his family with a knowing smile, as if to tell his children, "I told you." Then once he reached the bag, he made a heart sign with his hands. 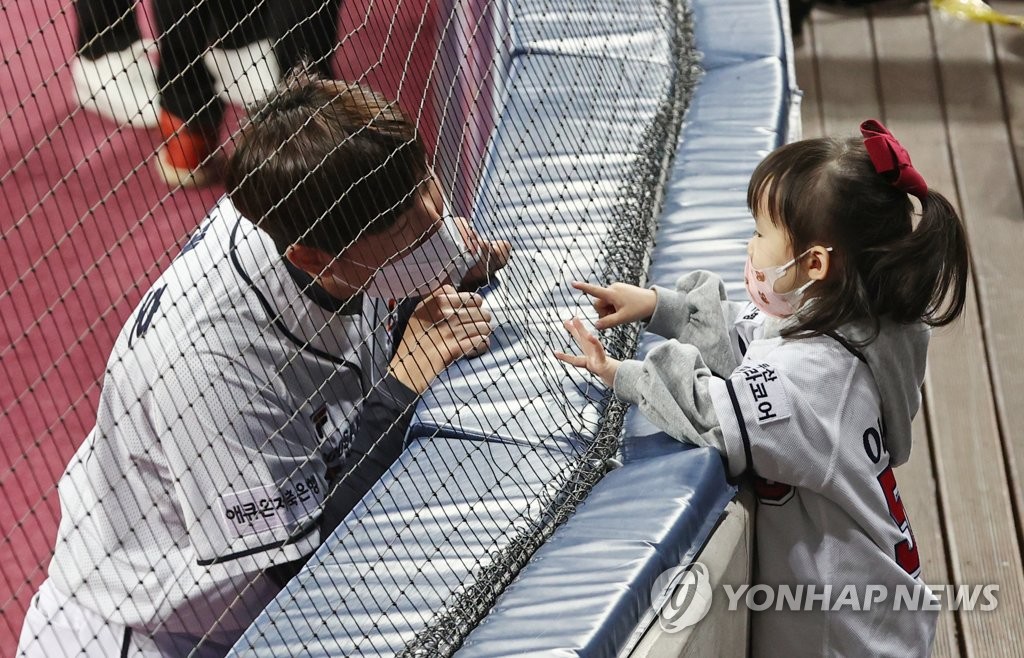 Kim said his young family hadn't been able to come to games until recently, while stadiums across the league remained closed during the coronavirus pandemic.

"I wanted my children to see me play and do some good things on the field," Kim said. "I am proud of what I did today. It feels great to take the lead in the series."

Kim said the heart sign was intended for his wife, who drove to the game with their two children while pregnant with the couple's third child.

"I think it's thanks to my wife's support that I've been playing so well," Kim said. "I wanted her to feel loved."

Kim has emerged as an early candidate as the Korean Series MVP, but his focus remained on the team.

"First and foremost, we have to keep winning games," he said. "We want to have the last laugh." 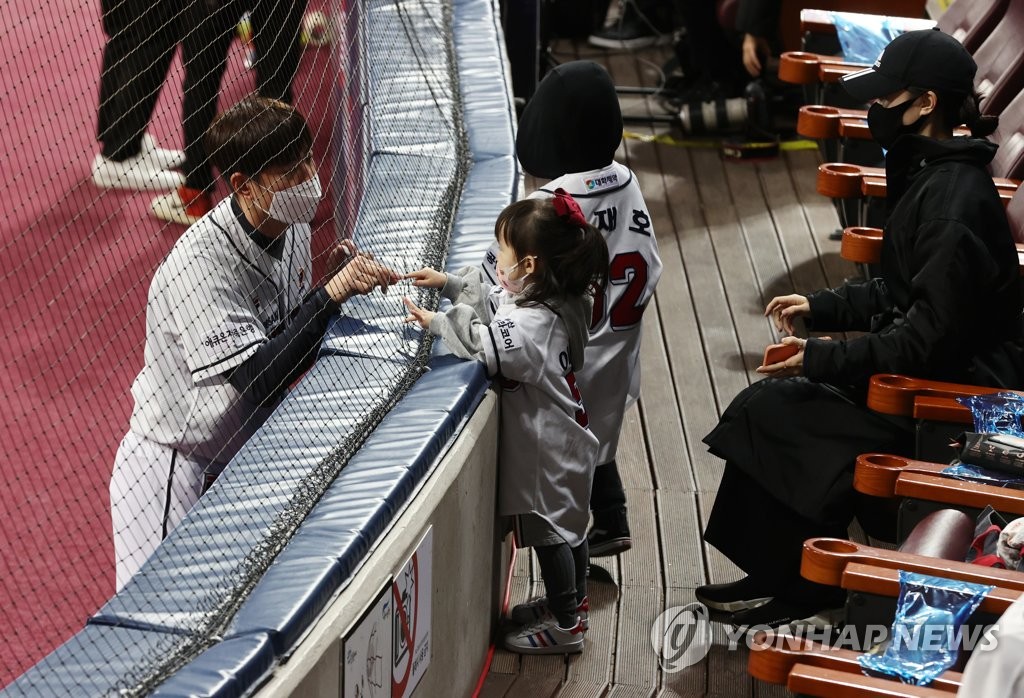 It was the third RBI of the game for Kim, who has emerged as an unlikely offensive star of the series. In the Bears' 5-4 victory in Game 2 Wednesday, Kim hit his first career postseason home run and drove in two runs.

Kim broke a 3-3 tie with a two-run single in the bottom third. The Dinos reclaimed the lead in a three-run fourth inning, and the Bears knotted the score at 6-6 in the top fifth.

In the decisive seventh, Kim came on with runners at the corners. The bat broke on contact but Kim got enough of the ball to dump it into center field for a run-scoring single.

On the mound, reliever Kim Kang-ryul was the adult in the room when most other pitchers had trouble throwing strikes. He came on in the fourth to put out the fire after the Dinos took a 6-5 lead. Kim sat down the first seven batters he faced and tossed 2 2/3 innings of one-hit ball.

Kim, 32, was making his first appearance of the series, and it was his first Korean Series game since 2017. He missed the 2018 and 2019 series with injuries.

"I didn't think I'd have a lot of opportunities to pitch, but I figured I'd get at least one shot," Kim said. "That was my mindset as I was getting ready."

Doosan manager Kim Tae-hyoung had said before the game that he didn't have much faith in Kim Kang-ryul. The skipper repeated that after the victory, saying he was surprised by how well the righty pitched.

"As one of the veterans, I am supposed to be the leader of the bullpen, but young guys have really stepped up," the pitcher said. "I feel bad about that. But as long as we each do our part, we'll be fine." 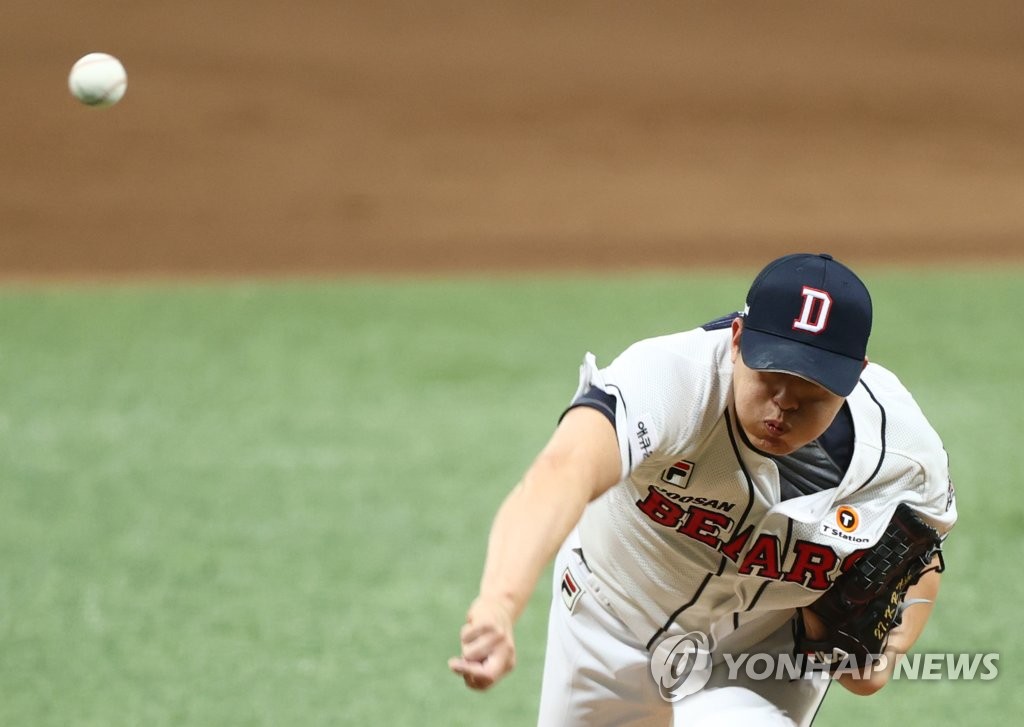