SEOUL, Nov. 23 (Yonhap) -- Shares in major units of South Korea's top conglomerate, Samsung Group, have risen at double-digit rates since the death of its chief a month ago on hopes for an economic recovery and more dividends from them, data showed Monday.

Share prices of Samsung Electronics and six other major subsidiaries jumped an average 13.8 percent between Oct. 25, when Lee Kun-hee died after being bedridden following a heart attack in 2014, and Friday, according to the data from the Korea Exchange.

Shares in Samsung Electronics, the group's flagship and world's top smartphone maker, closed at 64,700 won (US$57.9) on Friday, up 7.4 percent from Oct. 23. The world's leading memory chip maker got a boost from strong foreign buying. 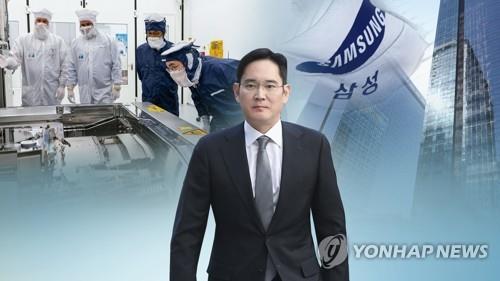 The late Samsung chief held a 4.18 percent stake in Samsung Electronics and received dividends of 350 billion won from the company, the largest among Samsung units.

Shares in Samsung C&T Corp., a construction and trading unit, jumped 16.3 percent over the cited period. Lee Jae-yong, the only son of the late Samsung chief and vice chairman of Samsung Electronics, owned the largest 17.3 percent stake in Samsung C&T.

Samsung Life Insurance Co., in which the late Lee held a 20.8 percent stake, soared 16.4 percent during the period.

Market watchers attributed the share rise in the major Samsung units to expectations for a recovery in the South Korean economy and hopes that those companies may expand dividends to help the late group chief's scions pay inheritance taxes.

Samsung heirs are estimated to pay around 10 trillion won in inheritance tax for the late chief's stock assets worth around 20 trillion won as of Oct. 23.
(END)