SEOUL, Nov. 23 (Yonhap) -- The military reported 33 new cases of the coronavirus on Monday, the highest daily total among service members, as cluster infections broke out at an Army unit in the border town of Cheorwon amid the nationwide spread of the virus.

Of the total, 26 enlisted soldiers and five Army officers were from the same base in Cheorwon, Gangwon Province, while an Army officer at another unit in the town was confirmed to have been infected and the other case is an Army officer based in the northeastern county of Hwacheon, according to the ministry.

The total cases at the Cheorwon unit rose to 37, and the figure is feared to grow as other members of the 200-strong unit are still awaiting their test results.

Currently, 1,673 service members are in isolation in accordance with the health authorities' guidelines, and the military has quarantined an additional 1,832 people under stricter antivirus schemes of its own as a preventive step.

Nationwide, the country added 271 more COVID-19 cases, including 255 local infections, raising the total caseload to 31,004, according to the Korea Disease Control and Prevention Agency (KDCA). 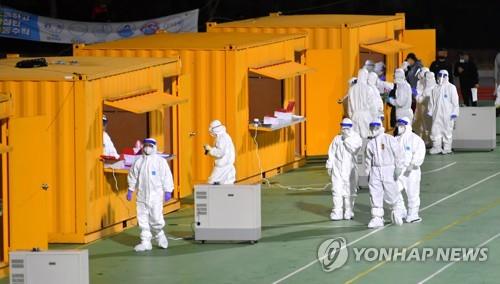