SEOUL, Dec. 23 (Yonhap) -- The Constitutional Court unanimously ruled Wednesday that the former Park Geun-hye government's creation of a blacklist of artists was unconstitutional due to its infringement on freedom of expression.

The Park administration was accused of drawing up a list of artists deemed critical of the conservative president and excluding them from government subsidies.

A group of listed artists filed a petition with the Constitutional Court in April 2017, alleging that withholding government subsidies due to an artist's overt support for an opposition party or the use of certain themes in artwork was an infringement on freedom of expression and freedom of art.

"Restrictions based on certain views or ideologies are the most serious and harmful form of restriction on freedom of expression," the nine-member bench said in the ruling.

The blacklist "goes against the principle of people's sovereignty and the liberal democratic basic order," it added.

Park's former chief of staff, Kim Ki-choon, and former Culture Minister Cho Yoon-sun are currently on trial on charges of masterminding the creation of the blacklist.

Park was removed from office in March 2017 amid a massive corruption scandal involving her close friend. She is also standing trial on bribery and other charges. 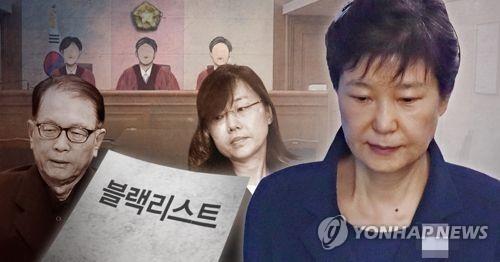