SEOUL, Jan. 1 (Yonhap) -- South Korea's exports decreased 5.4 percent in 2020 from the previous year amid the new coronavirus pandemic, data showed Friday, but the decline was partially cushioned by the latest recovery in the outbound shipments of chips.

Outbound shipments came to US$512.8 billion last year, and imports moved down 7.2 percent on-year to $467.2 billion, resulting in a trade surplus of $45.6 billion in 2020, according to the data compiled by the Ministry of Trade, Industry and Energy.

It marked the 12th consecutive year the country has posted a surplus.

"While exports lost ground annually, the country has been showing a clear sign of recovery since the third quarter," the ministry said in a statement.

Outbound shipments of electronics rose 0.7 percent on-year in 2020, rebounding from the 3.6 percent decrease posted in 2019 as more people spent time at home.

Annual exports of displays, on the other hand, shed 12.2 percent due to the rising competition with Chinese rivals.

The social distancing schemes and lockdowns led to a 13.1 percent on-year decrease in overseas sales of cars in 2020.

The trade ministry, however, said it was significant that the bio-health products, including COVID-19 test kits, also emerged as one of the top 10 export segments in 2020.

"It is notable that areas, such as non-memory chips, OLED, COVID-19 test kits and eco-friendly automobiles have posted a record-high performance for 2020," Industry Minister Sung Yun-mo said in a statement. 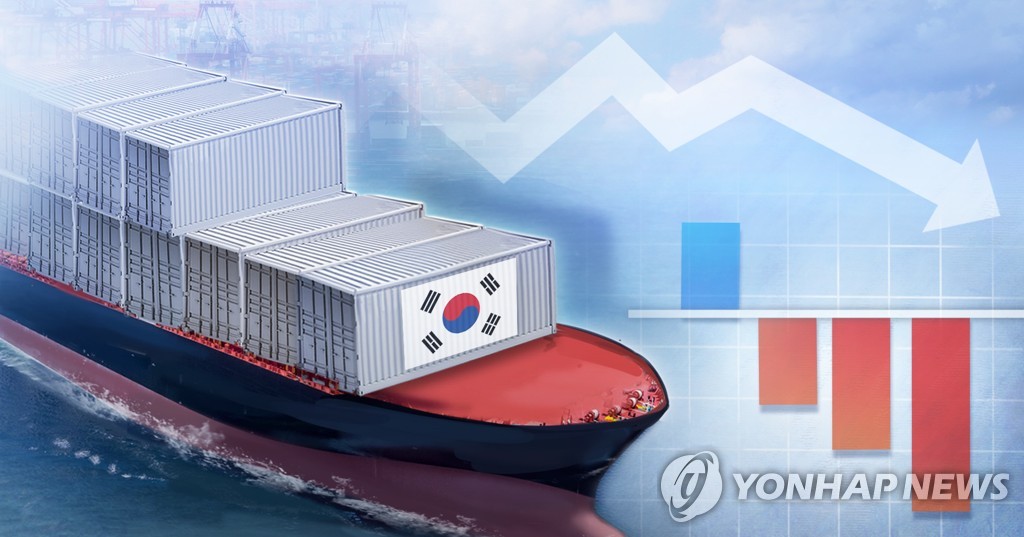 For December, the monthly exports advanced 12.6 percent on-year to reach $51.4 billion. It marked the first time since November 2018 for the export volume to surpass the $50 billion mark.

The monthly figure hovered far above the median market forecast of an 8.59 percent on-year rise.

The increase mainly came on the back of the robust outbound sales of chips.

Exports of chips advanced 30 percent on-year in December to $9.4 billion, expanding at the fastest pace since August 2018. They took up 18.4 percent of the combined monthly exports.

The ministry attributed the growth to recovering business sentiment around the globe, which led to more investment in data centers.

Exports of display products moved up 28 percent to $2.1 billion, as the COVID-19 pandemic led to strong demand for laptops and mobile devices.

Overseas sales of ships grew twofold on-year in December to $2.78 billion, and shipments of bio-health products also doubled over the period.

Outbound shipments of automobiles, on the other hand, moved down 4.4 percent to $3.61 billion, as the resurgence of COVID-19 cases in North America and Europe reduced demand.

Exports of petroleum goods dipped 36.5 percent to reach $2 billion due to the falling oil prices. Those of petrochemical products edged down 1.6 percent.

By destination, exports to China climbed 3.3 percent on-year in December to reach $12.7 billion, in line with a recovery in the world's No. 2 economy.

Exports to the United States increased 11.6 percent to $7.1 billion on the back of further demand for chips and auto parts.

Shipments to the European Union went up 26.4 percent to $5.5 billion on robust demand for COVID-19 test kits, the data showed.

Sales to Southeast Asian nations jumped 19.6 percent on the strong demand for chips and displays.

South Korean exports had extended their slump to a sixth month in August before rebounding 7.3 percent in September on increased shipments of chips and automobiles.

In October, exports moved down 3.8 percent due to fewer working days and a resurgence in the virus. In the following month, South Korea's exports again grew 4 percent on-year on the back of the robust overseas sales of chips.

For 2021, South Korea said uncertainties will still linger for exporters due to the virus pandemic, the growing protectionism around the globe and the launch of the new U.S. administration.

Nevertheless, the trade ministry said it will make efforts to revitalize its exports by utilizing global trade frameworks, including the Regional Comprehensive Economic Partnership (RCEP).

Asia's No. 4 economy currently awaits the official launch of the RCEP in the near future, which covers ASEAN and its dialogue partners -- South Korea, China, Japan, Australia and New Zealand.