SEOUL, Jan. 9 (Yonhap) -- A Navy officer was found dead Saturday after going missing while on duty aboard a patrol boat off the western border island of Baengnyeong, military authorities said.

The chief petty officer disappeared at around 10 p.m. on Friday in waters south of the island in the Yellow Sea, as the 450-ton patrol killer he was aboard was sailing for night guard operations, according to the Joint Chiefs of Staff (JCS).

After hours of search operations, the authorities found the man at around 10 a.m. Saturday around the point where he went missing and are now taking him to a port in Pyeongtaek, some 70 kilometers south of Seoul, the JCS added. The Navy's Second Fleet Command is located there.

"A probe is under way to find exact details, while leaving open all possibilities," a JCS officer said. "The Navy will take necessary measures."

Weather conditions were unfavorable at that time, and he was last captured on closed-circuit televisions (CCTVs) installed inside the boat at around 9:35 p.m. Around 40 service members were aboard the vessel, according to the officer.

Earlier, the JCS said that the military informed related entities of the incident via international communication lines and mobilized multiple Navy and government vessels for rescue operations. North Korea is also connected to the lines.

In September last year, a South Korean government official went missing near the western border island of Yeonpyeong and was adrift on the North Korean side of the Yellow Sea. Upon finding the official, the communist country shot him to death.

The South Korean military has come under fire for not appropriately communicating with North Korea over the issue, which could have prevented the tragedy. 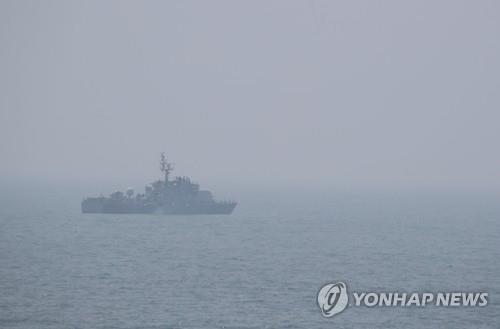