Choi made the appeal when he met separately with Mohammed bin Abdulrahman bin Jassim Al Thani, deputy prime minister and foreign minister, and Soltan bin Saad Al-Muraikhi, minister of state for foreign affairs, to discuss bilateral issues in Doha on Wednesday (local time), according to the ministry.

His trip to Qatar followed a visit to Iran, where a Korean oil tanker and its 20 crew members, including five South Koreans, have been held at a port since Jan. 4 over alleged sea pollution. Negotiations on the seized ship took place in Tehran but made little progress.

"Vice Minister Choi ... requested the maximum support possible from the Qatari side to resolve the matter concerning Iran's recent seizure of the South Korean vessel," the ministry said in a release.

Choi also discussed a range of bilateral issues with the Qatari officials, especially with regards to expanding cooperation in the energy development and shipping sectors, according to the ministry.

In his meeting with Qatari Energy Minister Saad Sherida al-Kaabi, the two sides agreed to bolster economic partnership to that end, with Choi noting that last year's deal between Korean shipbuilders and Qatar Petroleum for liquefied natural gas (LNG) carrier-building space reflects the solid trust between the two countries.

In the meetings with the top foreign policy officials, Choi also hailed the recent summit declaration adopted by the Gulf Cooperation Council (GCC) member states, including Saudi Arabia, in a move to restore ties with Qatar, according to the ministry. 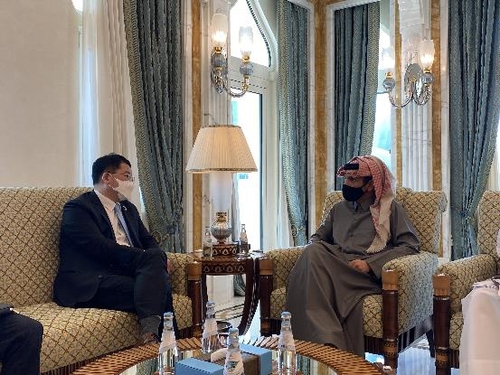