WASHINGTON, Jan. 21 (Yonhap) -- U.S. President Joe Biden on Thursday reaffirmed his plan to get up to 100 million Americans vaccinated over the next 100 days as part of his strategy to combat the COVID-19 pandemic that he said is based on science and not politics.

Biden also urged the people to "mask up" until they get vaccinated, insisting the act of wearing a mask alone can save tens of thousands of lives over the next few months.

"Well, one of our 100 day challenges is asking the American people to mask up for the first 100 days. the next 99 days," Biden told a press conference, one day after he was sworn into office.

"The mask has become a partisan issue, unfortunately, but it's a patriotic act," he added. 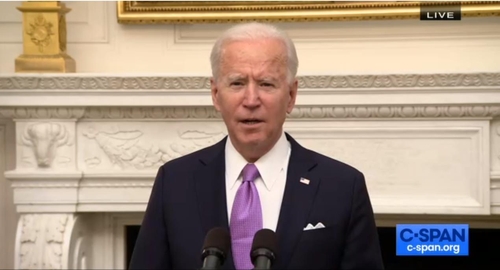 Biden's remarks came as the number of COVID-19 related deaths here topped 400,000 this week, accounting for some 20 percent of all COVID-19 deaths in the world. The U.S. accounts for about 4 percent of global population.

Biden said some 100,000 more Americans were expected to lose their lives over the next 30 days.

"Let me be very clear. Things are going to continue to get worse before they get better. The memorial we held two nights ago will not be our last one, unfortunately. The death toll will likely top 500,000 next month, the cases will continue to mount," he said.

Under a 198-page action plan unveiled Thursday, Biden said the government will work to set up at least 100 federal vaccination centers to expedite the vaccination rate.

Still, Biden noted it would take "months" before a majority of people can be vaccinated, stressing the need for everyone to help prevent the spread of the disease.

"The fact is that the single best thing we can do, even more important than the vaccines because they take time to work, and if we do this as Americans, the experts say, by wearing a mask from now until April, we would save more than 50,000 lives going forward," said the U.S. president.

The president also stressed the need for those coming from abroad to quarantine.

"In addition to wearing masks, everyone flying to the United States from another country will need to test before they get on that plane before they depart, and quarantine when they arrive in America," he said.

The move to require negative COVID-19 test results from people freshly arriving in the United States was announced by the previous Donald Trump administration, while the visitors had been recommended to quarantine for up to two weeks following their arrival here.

It was not clear whether the Biden administration was seeking to mandate a self-administered quarantine for those newly arriving in the country.