SEOUL, Jan. 31 (Yonhap) -- At a time when online concerts featuring live communication with fans and state-of-the-art technology have become a new norm in the K-pop industry, BLACKPINK decided to go back to the basics in its first livestream concert Sunday, urging the audience to focus solely on its music and performance.

The 90-minute gig, livestreamed for subscribers of a paid YouTube membership, showed the act's four members -- Jennie, Jisoo, Rose and Lisa -- singing some of their best hits and previously unperformed songs with a live band jazzing up the instrumentals in the background.

The quartet kicked off its long-awaited concert with the sassy anthem "Kill This Love." Each clad in red, white, silver and green, the four ladies appeared on an industrial-themed stage with flowers winding around concrete-style pillars.

Underscoring how its agency YG Entertainment had hinted that the live band would play an important role throughout the concert, the band was visible throughout most of the performance, with the camera zooming in on each performer of the band.

Following the performance, BLACKPINK said hello to its dedicated fan base -- also known as Blinks -- for joining the concert from all around the world.

"We waited for today for so long, and we are super excited to perform for you guys today," said the band's Thai member Lisa. "It's so great to think that we're onstage in a year and meeting Blink. Please enjoy the show till the end," Jisoo said.

Following a series of performances of their top hits like "How You Like That," "Playing with Fire" and "Lovesick Girls" -- the title track for their first full studio album "The Album" -- the four members put on solo performances.

Dressed in violet, Jisoo started off by putting on a romantic rendition of Swedish singer-songwriter Tove Lo's hit "Habits." Lisa reversed the mood by performing American rapper Doja Cat's "Say So." Instead of her usual spunky and tomboyish ambience, the BLACKPINK member went retro performing on a set of stairs and a stage lighted up with LED cubes. 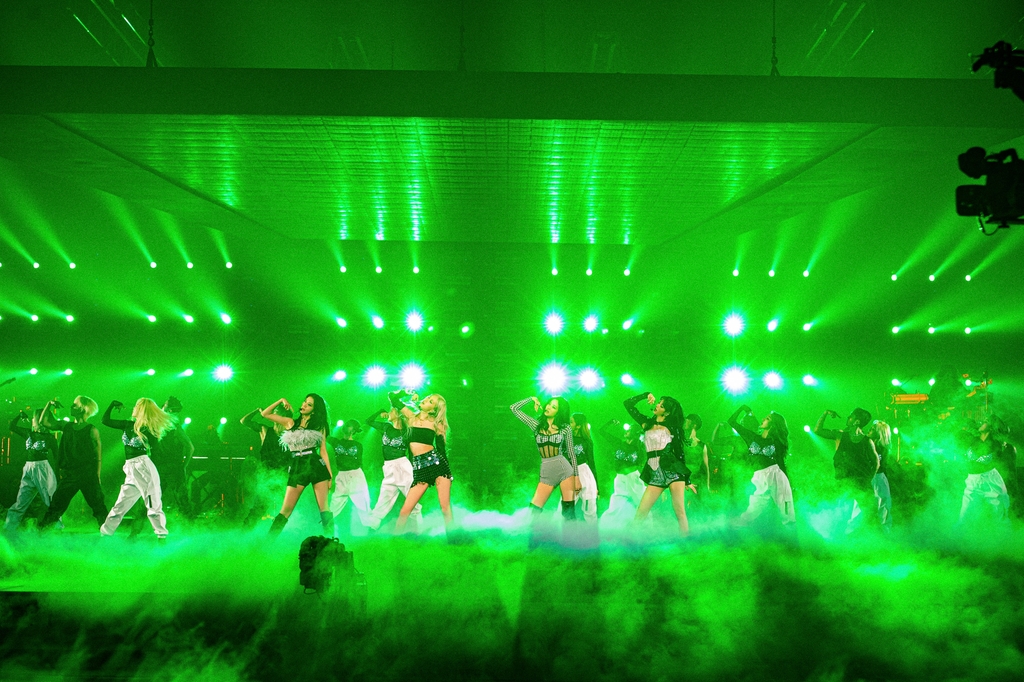 The quartet then got together again for a performance of "Sour Candy," its 2020 collaboration with American pop queen Lady Gaga. BLACKPINK said the performance was something "special" it had prepared for fans watching its first-ever livestream concert.

"We had a lot of fun as we practiced," Lisa said.

While unexpected, one of the most candid moments of the show came as BLACKPINK sat down onstage to perform some of its quieter songs like "Love to Hate Me" and "You Never Know" -- the final two tracks of "The Album."

While known for its powerful performances that fit its booming brass sound tracks, the quartet showed a more personal side as it sang the lyrics of "You Never Know". "But you'll never know unless you walk in my shoes ... 'Cause everybody sees what they wanna see. It's easier to judge me than to believe."

Jennie then put on a charismatic performance of a remix version of her 2018 solo debut track "SOLO," which followed with Rose's first-ever performance of her solo material. YG Entertainment had said the song captures the "sweet yet soulful vocal" of the group's main vocalist, hinting that it will be "surely different from BLACKPINK's usual musical style."

A music video of the song started off with Rose reciting English words and phrases like "pure, poetic, never dying, forever young" and stopping in full sentence, "And then it all just stopped. I never through we'd come to this."

Titled "Gone," the New Zealand-born member's first solo song turned out to be a slow-tempo song highlighting her high-toned, sentimental voice. A guitarist appeared alongside her premier performance of the song, adding to the poetic ambience. 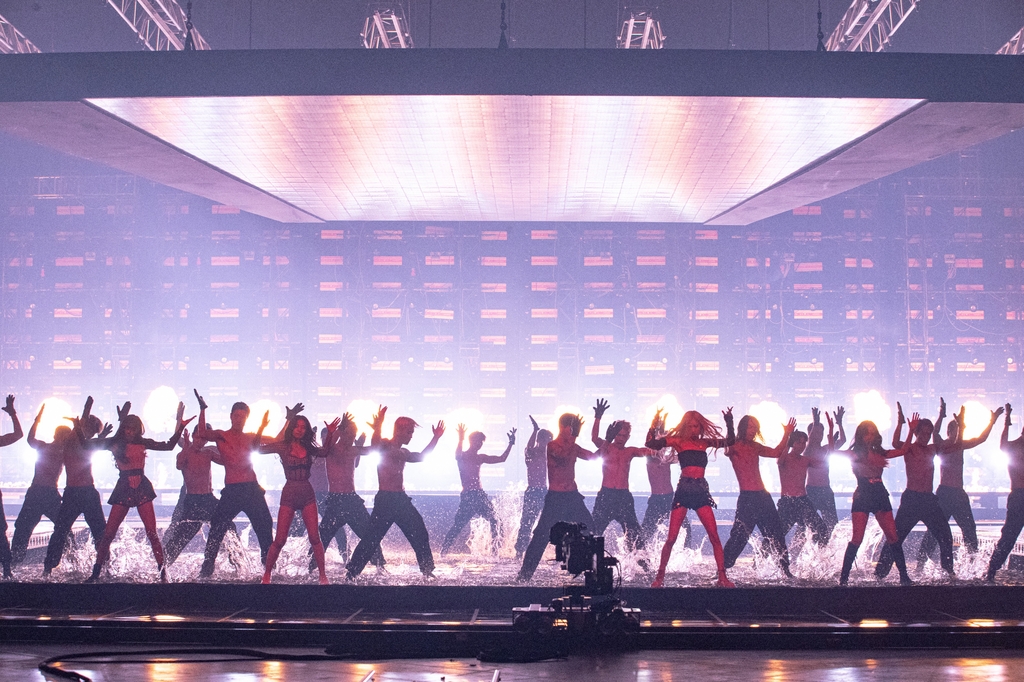 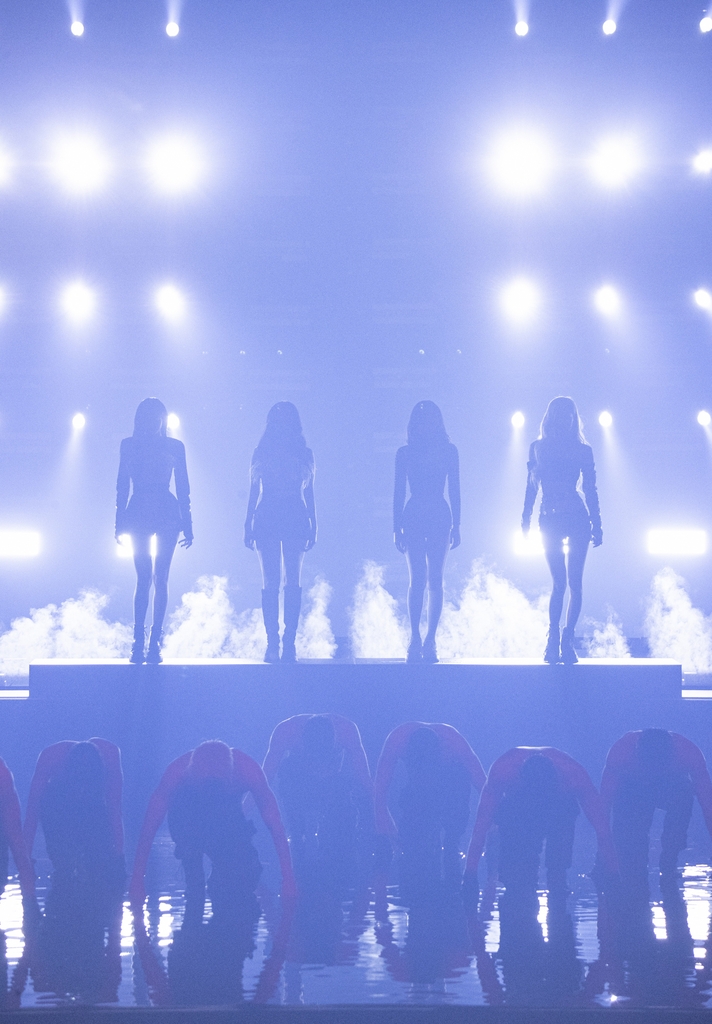 The gig's most powerful performance came toward the end of the show when BLACKPINK performed "Ddu Du Ddu Du," the song that has become the group's most-watched music video on YouTube with a record 1.4 billion views.

The act appeared on a stage with flaming fire in the background. The members then walked down to a stage filled with water and put on a mass choreography of the powerful track with a group of male dancers. Fans appeared to be in awe of the stage, leaving comments like "legends."

As the show moved toward the end, BLACKPINK thanked fans, revisiting its first-ever concert venue and reminiscing the bond that it has built up with its fans. The members went down memory lane as they spoke at empty seats in a dark-lit giant stadium.

"I guess I was overwhelmed during the last encore after the debut ... I was embarrassed," Jennie said as footage showed her younger self bursting into tears after a concert.

"We've had this dream since we were trainees and concerts were one of our biggest dreams ... I think it was a very previous moment," Rose said. "Watching our concert, I hope you get the feeling that we're all together."

The mood continued into the final performance -- a performance of the group's 2018 hit "Forever Young." As the smiling ladies sang and danced to the song and introduced members of the live band, the camera zoomed out to show giant print-outs of handwritten messages sent from fans around the world. 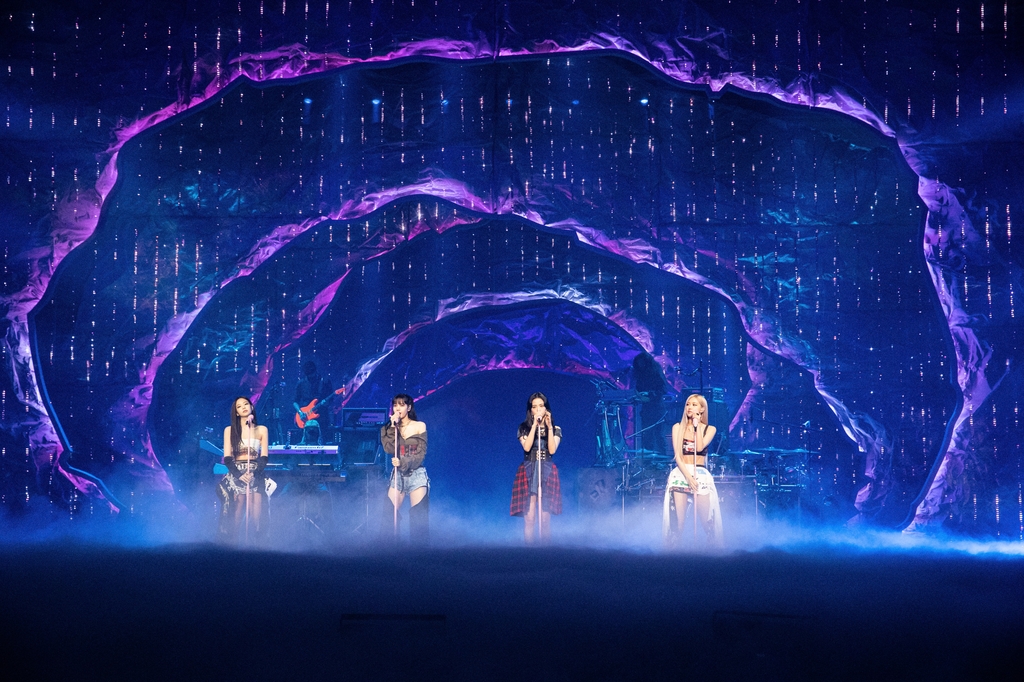 From the giant print-outs of the handwritten messages to the live band, BLACKPINK's first livestream concert followed the "back to the basics" formula, which may have appeared less splendid and tech-savvy than other online concert gigs but allowed the audience to focus more on BLACKPINK's color and voice.

"I doubt if it is a good way of expression if (an attempt) to show the latest technology instead ends up covering an artist's stage that could have shone brighter … I wanted to make a real 'show' where the artist shines through ... It should be a stage that embraces the artist's soul rather than technology," YG's performance director Jeung Chi-young said ahead of the concert.