SEOUL, Feb. 4 (Yonhap) -- Officials at the South Korean Embassy in Iran have met with the crew members aboard a Korean oil tanker seized in the country, the foreign ministry said Thursday, a day after Tehran said it will free most of the sailors.

On Tuesday (local time), Iran announced it will let the crew members detained aboard the MT Hankuk Chemi, leave, except for the captain, about a month after its military seized them along with the vessel in its waters for allegedly polluting the ocean.

The meeting took place Wednesday for about two hours inside the seized ship at the Shahid Rajaee port in the country's southern coast, the ministry said. The embassy officials checked their health conditions and safety.

The officials also listened to the crew members' thoughts about leaving the ship, the ministry added. Iran has said the captain needs to stay in the ship for management purposes, while the ship operator in Korea said it is impossible to keep the vessel checked by one person.

At the meeting, the captain gave reassurance that his crew were safe and sound, and called for the government to continue efforts for an early release of everyone on the ship, according to the ministry.

First Vice Foreign Minister Choi Jong-kun also spoke with the captain over the phone during the meeting and reaffirmed that the government will do its utmost to secure the release of the sailors and the ship, the ministry said.

Tehran's decision to release the sailors appears to have been made after Seoul made progress in talks with Washington about using some of the Iranian funds frozen in South Korean banks due to U.S. sanctions to pay off Iran's U.N. dues in arrears.

Despite Iran's denial, speculation has mounted that the ship seizure is related to its discontent over the frozen money. 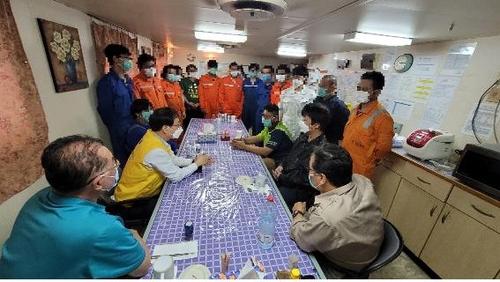 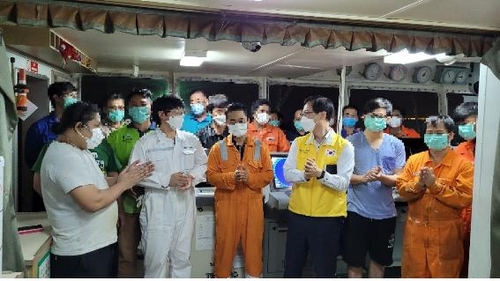