The current account surplus reached US$11.51 billion in December, widening from a surplus of $9.18 billion the previous month, according to the Bank of Korea (BOK). The current account is the broadest measure of cross-border trade.

Since the country logged a deficit of $3.33 billion in April 2020, the largest in almost a decade, on faltering exports amid the COVID-19 pandemic, the current account has stayed in the black for eighth straight months.

The goods balance logged a surplus of $10.5 billion in December, larger than a surplus of $5.6 billion tallied the previous month.

In December last year, the monthly exports advanced 12.6 percent on-year to reach $51.4 billion. It marked the first time since November 2018 for the export volume to surpass the $50 billion mark.

For the whole of 2020, South Korea's current account surplus stood at $75.28 billion, up 26 percent from a year ago, the BOK data showed.

The country's gross domestic product (GDP) shrank 1 percent in 2020 from a year earlier, marking the worst performance in over two decades.

The figure marked the worst on-year growth since 1998, when the nation's economy contracted 5.1 percent in the aftermath of the Asian financial crisis.

The country's overseas shipments have been battered by the fallout of the COVID-19 pandemic this year. But the pace of the slump has eased since June as major economies slowly began resuming business activities and easing border lockdowns. 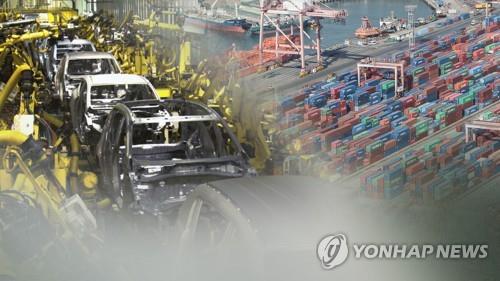