SEOUL, Feb. 7 (Yonhap) -- South Korea plans to help crew members aboard an oil tanker seized by Iran to return home as early as this week after Tehran's announcement that it will set most of them free, diplomatic sources said Sunday.

Last week, Teheran said it will free the crew members detained aboard the MT Hankuk Chemi, except for the captain, about a month after its military seized the vessel with its crew in the country's waters for allegedly polluting the ocean.

Officials at the South Korean Embassy in the Middle Eastern country have since had meetings with the crew members to check their health conditions and listen to their thoughts about leaving the vessel.

"We are working to finalize the list of members who are to return home. After swiftly checking their desires and other circumstances, we will provide them all necessary consular assistance," a diplomatic source said.

The ministry and the ship operator are to push for their return before the upcoming Lunar New Year holiday that runs from Thursday through Saturday, another source noted.

A total of 20 crew members were aboard the ship -- five South Koreans, 11 Myanmarese, two Indonesians and two Vietnamese, and some Korean members have said they will stay on the ship for management purposes.

Iran's decision to release the sailors appears to have been made after Seoul made progress in talks with the United States about using some of the Iranian funds frozen in South Korean banks due to U.S. sanctions to pay off Iran's U.N. dues in arrears.

Speculation has swirled that the ship seizure is related to Iran's discontent over the frozen money, but Teheran has denied that. 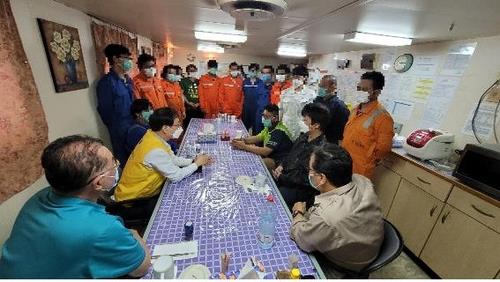