SEOUL, Feb. 15 (Yonhap) -- "Mr. Queen," a historical comedic drama series that drew both popularity and controversy, has wrapped up on a strong note, with the final episode becoming the fifth most-watched drama on cable channel tvN.

The series' 20th episode aired Sunday and recorded 17.4 percent in viewership, according to data by Nielson Korea. 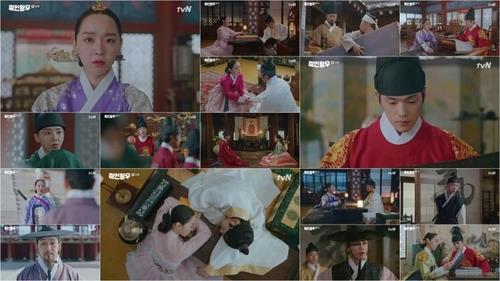 Starring Shin Hye-sun and Kim Jung-hyun, "Mr. Queen" tells the story of a man named Bong-hwan, a senior chef in present-day South Korea's presidential office, who finds himself trapped in the body of Queen Cheorin in the mid-19th century of the Joseon Dynasty after a mysterious accident.

After overcoming political and gender struggles and saving the king from threats to the throne, Bong-hwan safely returns to his own body in the 21st century.

Lead actress Shin's outstanding performance in portraying the medieval-era queen, who has the mentality of a maverick playboy but has to serve royal duties for the kingdom, and the ensemble of the other cast were more than enough to entertain coronavirus-weary viewers, drawing them to home screens.

The transgender body-swap story, smoothly woven with historical events, such as power strife between two big political clans, and persistent comical touches also contributed to the popularity of the TV series.

In the second episode, Bong-hwan refers to "The Annals of the Joseon Dynasty" as a tabloid, sparking public disapproval that the remake of a Chinese TV series neglected the country's cultural asset and UNESCO's Memory of the World heritage.

The criticism was harsher since "Mr. Queen" was based on the Chinese web drama "Go Princess Go" (2015), an adaptation from the novel of the same name by Xian Chen, who reportedly had made offensive remarks about Korean culture and people in his previous piece.

In mid-December, shortly after the show kicked off with negative feedback, producers of "Mr. Queen" issued a public apology regarding the controversies.

"Vincenzo," a story about an Italian mafia consigliere of a Korean descendant, played by star actor Song Joong-ki, will follow the historical comedy on tvN this weekend.