(ATTN: UPDATES with more info throughout)
By Kim Han-joo

SEOUL, Feb. 15 (Yonhap) -- South Korea will begin its first inoculations against the new coronavirus on Feb. 26 with AstraZeneca's COVID-19 vaccine, but the inoculation of seniors will be put on hold amid efficacy concerns, health authorities said Monday.

The Korea Disease Control and Prevention Agency (KDCA) said people and patients, excluding those aged 65 and older, at nursing homes and other high-risk facilities will receive the first batch of the vaccine developed by the British-Swedish pharmaceutical giant and Oxford University. 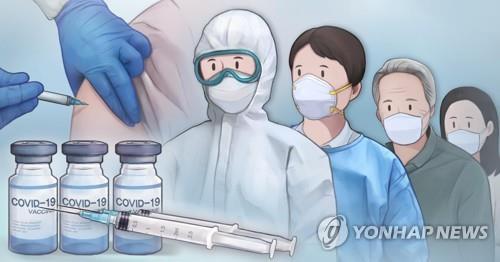 The decision to put the vaccination of seniors on hold could possibly hamper the country's inoculation plan, which had initially called for a total of 760,000 health care workers and the elderly to be among the first to receive vaccinations between February and March.

A total of 272,000 patients and people working at facilities, including sanatoriums, nursing facilities and rehabilitation facilities, will receive the first shot of AstraZeneca's two full-dose regime, the KDCA said.

South Korea aims to get 70 percent of its population inoculated by September, with so-called "herd immunity" here predicted to be created by November.

Last week, the Ministry of Food and Drug Safety approved AstraZeneca's vaccines on the condition that the pharmaceutical firm submit further data on the current phase three clinical trials on adults aged over 18.

Still, the ministry cautioned against inoculating people aged 65 and older with the vaccine, after a separate review panel said earlier there is not enough data on its efficacy for the age group.

Following the warning, the government said it will postpone AstraZeneca vaccine shots for people aged 65 or older until further data, including the result of the phase three clinical trials, is obtained. The decision will be made in late March.

KDCA Director Jeong Eun-kyeong said in a briefing that people aged 65 and older are expected to receive the shots in the second quarter, possibly with vaccines by AstraZenca or U.S. drugmaker Novavax.

Controversies arose globally on the use of AstraZeneca's COVID-19 vaccine for seniors as there is not enough data to back its efficacy in older people. Last week, the European Medicines Agency's expert committee unanimously recommended the vaccine to be used for people 18 and over.

However, several European countries, including Germany and France, have announced they will restrict the vaccine to younger people and cautioned against its use for the elderly, citing insufficient data on its efficacy.

Other countries, including Switzerland and South Africa, have postponed approving the vaccines, arguing that further data is needed.

Starting March 8, a total of 354,000 medical workers at general hospitals with a high number of COVID-19 patients with severe symptoms will be given AstraZeneca vaccines, the KDCA said.

Other front-line COVID-19 workers, such as paramedics, quarantine officers and epidemiological investigators, will also be subject to inoculations with AstraZeneca vaccines starting March 22, it said. The number is expected to reach around 78,000.

In early January, the pharmaceutical company sought emergency use approval for its vaccine to be manufactured by SK Bioscience Co., a vaccine unit of South Korea's SK Group, at a factory here.

The vaccine is deemed more convenient for mass inoculations as its storage temperature is 2 to 8 C, compared with the vaccines by Pfizer Inc. and Moderna that require ultra-cold chain storage.

Vaccines by U.S. pharmaceutical company Pfizer are expected to arrive in the country between late February and early March, which will be provided to around 55,000 health care workers treating COVID-19 patients.

Pfizer vaccines will be provided under the World Health Organization's global vaccine COVAX Facility project, and the shots will first be given at five state-run vaccination facilities as the products require ultra-cold chain storage.

The authorities earlier said they plan to further build a total of 250 such facilities at general hospitals, gymnasiums and other kinds of government sites across the country by July.