SEOUL, Feb. 15 (Yonhap) -- South Korean star actor Song Joong-ki will return to the small screen as a Korea-born lawyer of an Italian Mafia in the upcoming black comedy "Vincenzo."

The new show, scheduled to premier this weekend on cable channel tvN, is about Vincenzo Cassano (Song), a Korean Italian who works for the Mafia as a consigliere. He comes back to his motherland and gets involved in some corruption scandals and fights against social powers in his way.

It is one of the most anticipated TV series this spring for its all-star cast including Song, Jeon Yeo-been and Ok Taecyeon, who is also a rapper with boy group 2PM. 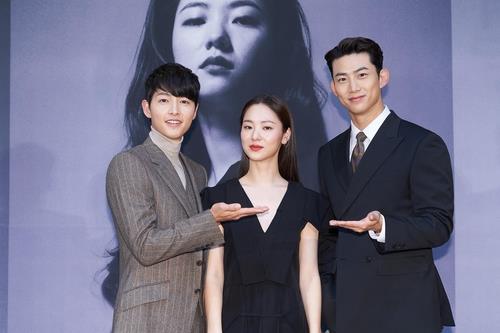 Song, who chose "Vincezo" as his return project since his last appearance in the fantasy "Arthdal Chronicles" (2019), said he felt so thrilled and satisfied when he first read the script about bad guys who defeat great villains that spoil society.

"When I first read a short summary of 'Vincezo,' I sympathized with the screenwriter's caustic point of view," he said in an online press conference on Monday. "It was interesting and fresh that the powerful lose to the more powerful, who are not always good."

"Vincenzo" is written by screenwriter Park Jae-bum, who is known for well-rounded dark comedies like "The Fiery Priest" (2019), which satirizes deep-rooted corruption and cronyism between politicians and businessmen.

Song said his character is so callous and ruthless that he does everything to overpower his enemies and even resorts to evil means. It is largely different from his past roles like a warm-hearted special forces team captain in "Descendants of the Sun" (2016) and a capable warrior in "Arthdal Chronicles."

"I know that I have many different personalities that my fans can't see," he said. "I've been trying to find my wicked, severe or sharp dispositions and present those parts through Vincenzo."

At the same time, Song has to portray the man standing on the borderline as a Korean Italian feeling loneliness and alienation in Korea, which he left decades ago.

"He has lived in Italy for most of his life. But he is a foreigner in his motherland," he said. "It's pathetic and touching, but we are pleased with his heroic actions."

Director Kim Hee-won, who created the historical romance "The Crowned Clown" (2019) and "Money Flower" (2017), said she has chosen Song for the title role for the actor's multi-faceted characteristics that he has displayed in his previous titles.

"I like Song in 'The Innocent Man' (2012). His face represents darkness and loneliness as well as innocence. That perfectly fits Vincenzo," she said. "And he is good at comedy, which is also a crucial part in this project."

She said she focuses on striking balance between the darkness of the storyline and the lightness of humor in order to convey the critical messages against corruption or backdoor dealings between authorities and business in a satirical way.

"Our protagonists are not good and nice. Their will is more evil than villains," she said. "It's a very caustic story but is told in a humorous tone. It's very hard to put them together."

"Vincenzo" will premier on tvN this Saturday and will be also available on Netflix simultaneously. 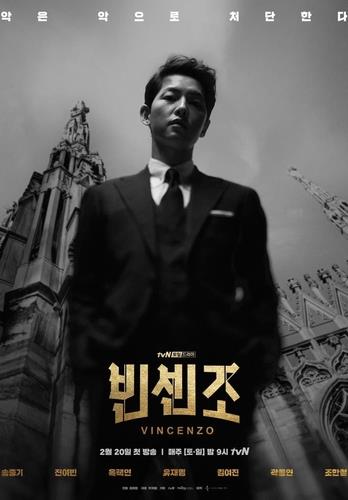