SEOUL, Feb. 24 (Yonhap) -- Nearly 70 percent of South Koreans are in favor of a bill on disqualifying doctors convicted of felonies, which is currently under review at the National Assembly, a public opinion poll showed Wednesday.

According to the survey conducted Tuesday on 500 people aged 18 or older by Realmeter, 68.5 percent of the respondents were in support of the bill to revise the Medical Service Act.

Another 26 percent, however, objected to the bill, while the remaining 5.5 percent said they are not sure, the poll showed.

The support rate for the bill was particularly high among people in their 40s, with 85.6 percent of those in the age group supporting the proposed revision.

The support rate was even higher at 89.9 percent among those who back the ruling Democratic Party (DP), while the corresponding rate among the supporters of the main opposition People Power Party was 38.8 percent, it also showed.

The survey, commissioned by internet news outlet Ohmy News, has a 95 percent confidence level with a margin of error of plus or minus 4.4 percentage points.

The revision bill, proposed by DP lawmakers, seeks to revoke the medical licenses of doctors who are given an imprisonment or worse sentence for committing serious crimes, such as murder or rape, for up to five years.

The ruling party, commanding a majority at the National Assembly, is planning to push the bill through the legislation committee and then a plenary parliamentary session slated for Friday.

Vehemently protesting the move, however, the Korean Medical Association (KMA), the country's biggest doctors' association representing around 130,000 practitioners, has warned that it will go on a general strike if the bill is passed by the parliamentary judiciary committee, the last legislative gateway to the final general session voting on the bill. 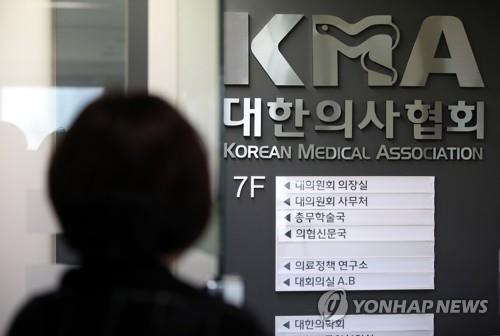