SEOUL, March 4 (Yonhap) -- The buying of properties and lands for investment purposes is common in South Korea, where home prices have been on a steady rise despite ups and downs over the past decades.

But alleged speculative purchases of land lots by officials at a state-run housing developer could not come at a worse time, with public outcry over soaring home prices at a peak.

Moreover, their murky deals are threatening to undermine the credibility of the Moon Jae-in administration's real estate policies, which have been repeatedly under fire for years for their unwanted results.

A civic group claimed earlier this week that more than 10 ex and current employees at the Korea Land & Housing Corp. (LH) bought plots of land in Gwangmyeong and Siheung, two cities just south of Seoul, before the government announced large-scale public development plans there last month.

A series of other allegations over similar purchases of land lots in other regions also have been raised, even pushing President Moon to order a thorough probe into such allegations.

A task force headed by the Prime Minister's Office was launched to look into all land transactions by public officials in the areas subject to the government-led development projects.

All employees of the Seoul metropolitan government, LH, the land ministry, Gyeonggi Urban Innovation Corp. and other relevant government institutions are subject to the investigation. 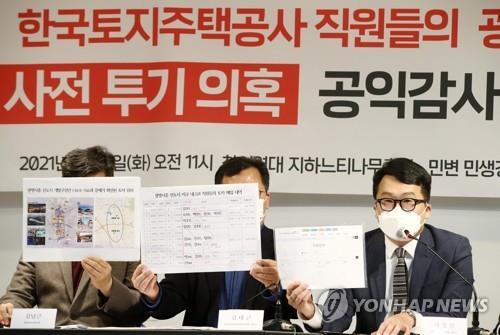 The land ministry suspended 13 LH officials believed to be involved in murky land transactions from their duties and said it will seek to ban land ownership transactions by public officials related to land development projects for investments, not for residential purposes.

No doubt, the LH officials' alleged land investments worth 10 billion won (US$8.9 million) in the two cities between April 2018 and June 2020 invited public anger amid rising real estate prices despite the government's 25 rounds of measures to curb prices.

Should the allegations turn out to be true and their land transactions be proven illegal with internal information, it could deliver a harsh blow to the Moon government, which has been struggling to rein in skyrocketing home prices across the nation.

In the latest measures announced Feb. 4, the government said it will ease building regulations and support redevelopment projects in the Seoul metropolitan area and other major cities to supply 836,000 homes.

The ministry said the supply plan is aimed at providing affordable housing in big cities, which are convenient to live in thanks to their proximity to jobs and quelling concerns among potential first-time buyers.

Rising home prices have shown no signs of a letup despite the government's efforts to stabilize the real estate market, dragging down Moon's approval ratings to the lowest point since he took office in May 2017.

The rising property prices and tight lending rules made it more difficult not only for low-income families but also high earners to buy a home in Seoul without financial support from their parents. 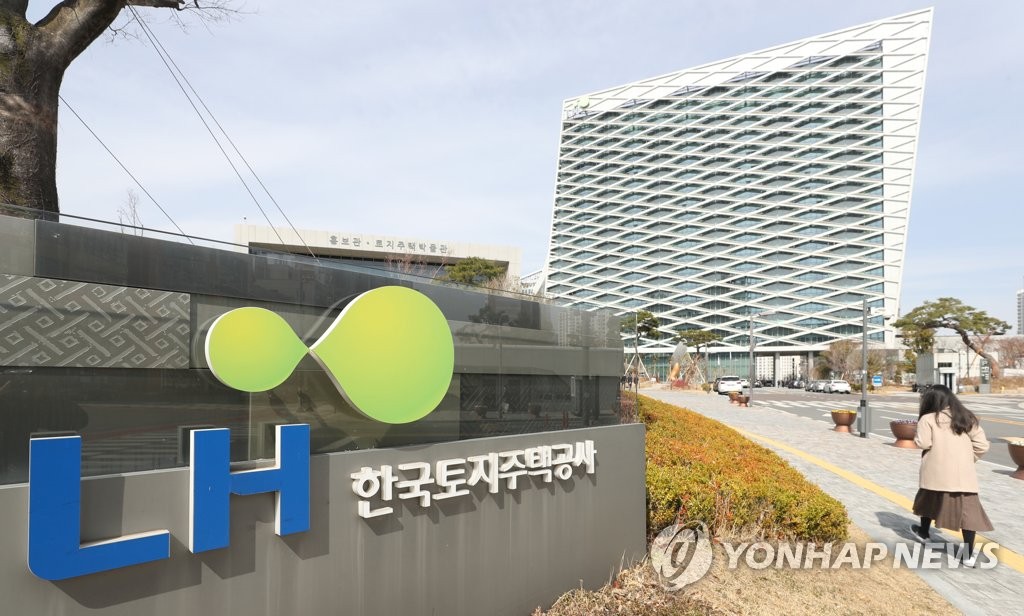 "It is nothing other than a criminal act if public officials used any undisclosed development information to purchase properties for massive investment gains. It is similar to insider trading in the stock markets," Cho Joo-hyun, an honorary professor of the department of real estate studies at Konkuk University, said by phone.

He said such "unethical" behavior by the LH officials will badly hurt public trust in state property policies and the development projects won't drum up public support.

Meanwhile, Land Minister Byeon Chang-heum may have to bare some responsibility for the LH officials' misbehavior as he served as CEO of the state land developer from 2019-2020, though the presidential office dismissed the possibility of asking him to take any responsibility for the suspicious deals by the LH employees.

In an online briefing Thursday, the minister apologized for the LH employees' alleged speculative land deals and vowed to restrict land transactions by public officials involving development projects and to make them report their land purchases even if the deals are for residential purposes.

But the former LH CEO stressed that the state-led housing development projects at the center of the controversy will remain intact going forward, and such projects will be implemented in a transparent manner.