(ATTN: MODIFIES headline, lead; UPDATES with another poll, other details in 3rd para, from 5th para)
By Lee Chi-dong

SEOUL, March 8 (Yonhap) -- Public support for Yoon Seok-youl has bounced back sharply to take the lead over other potential presidential candidates in South Korea, a poll showed Monday, following his resignation from the post of prosecutor general last week.

The poll on who is fit to become the country's next president was conducted last Friday. In the previous KSOI poll, conducted on Jan. 22, Yoon won 14.6 percent. At that time, his support rate was on a steady decline. 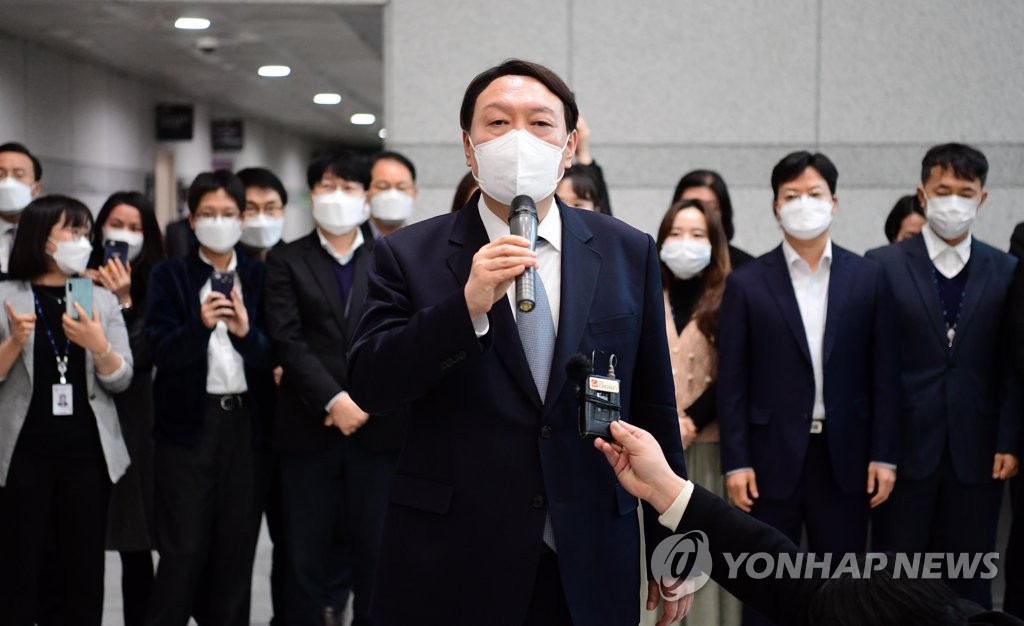 A similar survey by Realmeter also showed that Yoon is the front-runner. In the two-day poll of 1,000 adults from Saturday on favorability ratings, Yoon topped the list with 28.3 percent. The Gyeonggi governor received 22.4 percent, and the DP chief gained 13.8 percent.

The gap between Yoon and the governor stayed within the margin of error, which is plus or minus 3.1 percentage points with a confidence level of 95 percent.

Yoon announced his decision to quit on Thursday, protesting the DP's push for a new investigative agency that would further weaken the state prosecution service's power and authority.

"The spirit of the constitution and rule of law, which are the backbone of this country, are being destroyed," he argued.

He told media earlier that depriving the prosecution of its investigative rights completely would bring about the prevalence of corruption.

He did not clarify whether he plans to enter politics, but many expect that he will do so.

Yoon's approval rating surged last year amid his wrangling with then Justice Minister Choo Mi-ae over prosecution reform and then dropped markedly with her departure from the ministry.

However, it "has recovered in a moment" due to the conflict over the envisioned body tasked with probing "serious" crimes and his remarks on concerns about corruption and constitutional values, Bae Cheol-ho, a Realmeter official, said.

Yoon is widely seen as a potential presidential candidate for the opposition bloc, with one year left before the election.

Keen attention is being paid to the impact of his resignation on the April 7 Seoul and Busan mayoral by-elections as well as on the post-election political landscape.

The margin of error of the KSOI's latest survey is plus or minus 3.1 percentage points with a 95 percent confidence level.

Meanwhile, the public is split over whether it is appropriate for the former top prosecutor to become a politician, according to a separate poll. In the Realmeter survey of 500 people, aged 18 or older, last Friday, 48 percent gave a positive assessment, while 46.3 percent gave a negative one.

In Seoul, 46.0 percent approved of his possible political career and 45.2 percent expressed disapproval.

Among conservative-minded voters, 60.6 percent said it is appropriate, while 70.1 percent of liberals answered negatively.

The poll's margin of error is plus or minus 4.4 percentage points with a 95 percent confidence level.