SUWON, South Korea, March 8 (Yonhap) -- All foreign workers in Gyeonggi Province, which surrounds Seoul, were ordered Monday to take the coronavirus test before March 22, as part of authorities' efforts to cope with a recent spike in COVID-19 cases in foreigner-dense areas and workplaces.

The latest administrative order from the provincial government of Gyeonggi was delivered to about 85,000 foreign workers in the nation's most populous province via their employers, officials said.

Under the order, the migrant workers hired by some 25,000 workplaces with at least one foreign employee are obliged to take the virus test between Monday and March 22, they said. 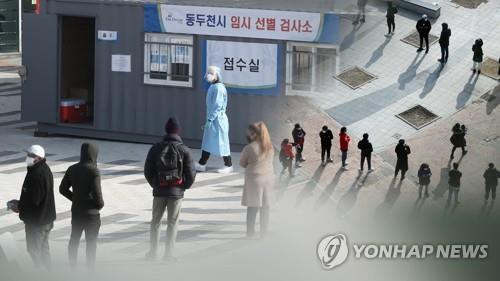 "The administrative order is intended to keep coronavirus clusters tied to foreigner-dense workplaces from spreading to the concerned communities," said Gyeonggi Province Vice Gov. Lee Yong-chul in an online briefing.

Besides the some 85,000 migrant workers, all other foreigners staying illegally in the province won't be disadvantaged in any way if they comply with the coronavirus tests and possible medical treatment during the administrative order period, Lee said.

Foreign workers can take COVID-19 tests at temporary testing stations in their neighborhoods free of charge, he said, adding those who have taken the virus test after Feb. 15 won't be affected by the order.

Violators of the administrative order can be punished with a fine of 2 million won (US$1,770) to 3 million won. In addition, violators responsible for coronavirus transmissions can be ordered to reimburse the government the money for relevant testing, investigations and treatments.

According to government data, 1,747 foreign nationals tested positive for the coronavirus in South Korea in the first two months of this year. By region, Gyeonggi Province accounted for 47.1 percent of all foreign patients, with Seoul, South Chungcheong Province and Incheon representing 28 percent, 6.5 percent and 5.4 percent, respectively.

In Dongducheon, a Gyeonggi city north of Seoul, as many as 151 foreign nationals have tested positive for COVID-19 in a preemptive testing conducted over the past two weeks.

In another noteworthy case, an infection cluster tied to a plastic manufacturing plant in Namyangju, a Gyeonggi city just east of Seoul, has so far reported at least 124 foreign patients. The foreign employees reportedly lived together in the plant's dormitory.

In response, quarantine authorities have been conducting intensive coronavirus field inspections at foreigner-dense areas and workplaces.

The Ministry of Justice has also announced a decision to allow all foreigners staying illegally in South Korea to take coronavirus tests free of charge without disclosing their identities. It said crackdowns on illegal stayers will be temporarily suspended to help minimize loopholes in the nation's ongoing fight against the pandemic.