SEOUL, March 17 (Yonhap) -- Super Junior, one of the longest-running K-pop boy groups, has dropped a new album in a belated celebration of the 15th anniversary of its debut.

The group's 10th studio album, titled "The Renaissance," carries 10 songs, including the main track "House Party" as well as "Super," "Burn the Floor," "Paradox" and "Closure."

"This album shares a lot of similarities with our very first album," Leeteuk, the band's leader, said during a press conference held ahead of the album's release on Tuesday.

Referring to the album title, Leeteuk voiced hope that the anniversary album will serve as a "turning point" for a "new renaissance" in the group's career.

The 10-track album was supposed to drop last year in line with the group's 15th anniversary, but the plan was pushed back for better quality.

"The members were anxious about the delay just like fans. But we teamed up to prepare for the album smoothly," Leeteuk said. 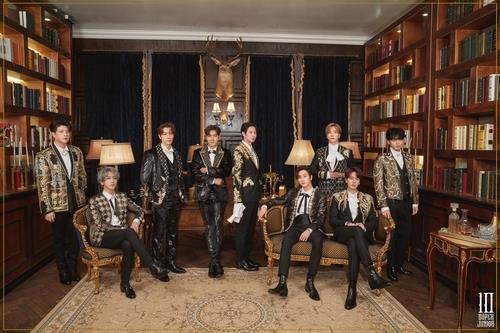 The upbeat disco-pop number, which has a comical touch, conveys the message of enjoying the little things in life while playing by the rules during the pandemic.

The lyrics say "Let's put aside our wishes to hang out for a little while" and "stick to the cool manner of protecting each other in accordance with the new rules," reflecting the changes that COVID-19 has prompted in everyday life.

"Pop music should portray the world people are living in at the moment," Leeteuk said. "But we tried to deliver the message in a light and joyful way rather than taking a serious approach."

"We hope the pandemic goes away soon so that the next generation will be asking 'What is COVID-19?' after listening to our song," member Heechul added.

Since its debut in 2005, Super Junior has long been popular at home and abroad with a string of hit songs, such as "Sorry, Sorry," "U," "Mr. Simple" and "Black Suit." In May, the group attracted around 123,000 viewers from across the world to its online concert.

Looking back on the group's career, Eunhyuk said the 2012 concert in Paris was his most memorable moment.

"Back then, the dominant sentiment on K-pop was that it is culture only popular in Asia. But the Paris concert helped K-pop pave its way to Europe," he said.

Member Shindong reminisced about the time when Yoo proposed the idea of the hand-rubbing dance moves for "Sorry, Sorry," one of the group's most successful songs. The number went viral for its catchy melody and dance moves in 2009.

"We hope our fans and the public will always remember us as a group with dynamic energy and distinct blitheness," Donghae said.