SEOUL, March 22 (Yonhap) -- A Seoul court has postponed a trial of Lee Jae-yong, the imprisoned de facto leader of Samsung Group, due to his health condition after surgery for appendicitis, legal sources said Monday.

The Seoul Central District Court has delayed the trial of Lee and the group's officials for a controversial merger of two Samsung affiliates and alleged accounting fraud from Friday until April 22, the sources said.

The court accepted a request from Lee's attorney that Lee should be given medical treatment for three weeks, they said.

Last September, Lee was indicted on charges of unfair trading, stock manipulation and breach of trust in relation to the 2015 merger between Cheil Industries Inc. and Samsung C&T Corp., seen as a key step toward his succession, and alleged accounting fraud at the pharmaceutical unit of Samsung Biologics Co. 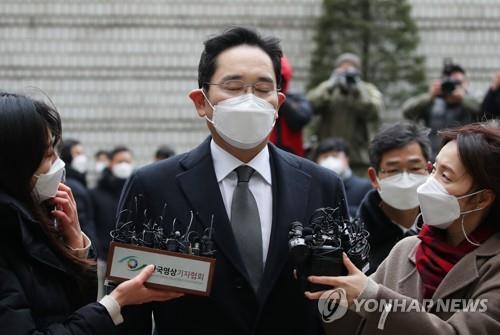 Lee, vice chairman of Samsung Electronics Co., was transferred to Samsung Medical Center in southern Seoul and received the surgery last Friday due to a ruptured appendix.

In January, the 52-year-old tycoon was sentenced to two and a half years in prison in a retrial of a bribery case involving former President Park Geun-hye. Since then, he has been staying at Seoul Detention Center in Uiwang, south of Seoul.