WASHINGTON, March 23 (Yonhap) -- A vigil will be held this week to honor the victims of recent deadly shootings in Atlanta and to call for a stop to hate crimes in the United States that are increasingly targeting people of Asian descent, organizers said Tuesday.

The solemn event will be held in Atlanta on Friday and streamed live at http://326vigil.org, according to KA Vote, a nonpartisan organization dedicated to promoting Korean American civic engagement and representation.

The move comes in the wake of shootings at three day spas in the Atlanta region last week that left eight people dead, six of them women of Korean and Chinese descent. 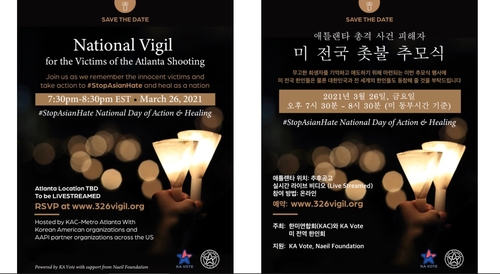 It is part of hundreds of events taking place on March 26, promoted as #StopAsianHate National Day of Action & Healing, led by congressional leaders, including Rep. Grace Meng (D-NY).

March 26 is when the first U.S. law on naturalization, the Naturalization Act of 1790, was enacted, limiting citizenship to only "free white persons."

"We hope to show the world that Korean American communities in all major U.S. cities, and all across the world and in Korea, are united in mourning for the victims of the Atlanta shootings and standing up for their justice," said the organizers. They include the Korean American Coalition-Metro Atlanta, which is hosting the event with the Korean American Association of Greater Atlanta on Friday.

The U.S. has seen a sharp spike in anti-Asian crimes and incidents since the start of the COVID-19 pandemic last year.

Vice President Kamala Harris earlier said around 3,800 such incidents were reported in 2020 alone, partly blaming the former Trump administration for the rise in anti-Asian violence.

"For the last year we've had people in positions of incredible power scapegoating Asian Americans," Harris said while visiting Atlanta on Friday for a meeting with Asian-American community leaders there.

"Harm against any one of us is a harm against all of us. The president and I will not be silent," she has said.

The Atlanta shootings have not been officially designated a hate crime. The suspect has been described as a patron of the spas.