SEOUL, April 8 (Yonhap) -- Some softly-hit balls by opponents and a lack of run support from teammates made a hard-luck loser out of Toronto Blue Jays' starter Ryu Hyun-jin.

Ryu suffered his first loss of the season despite holding the Texas Rangers to two runs across seven innings at Globe Life Field in Arlington, Texas, on Wednesday (local time). Ryu scattered seven hits while striking out seven and walking none, as the Blue Jays lost 2-1. 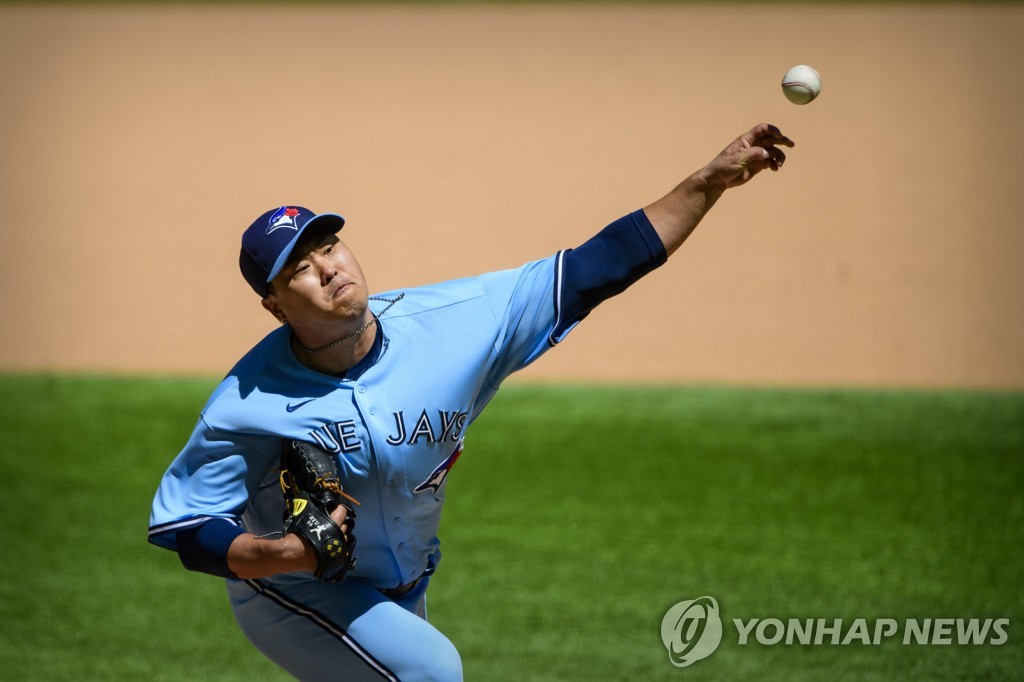 One of those hits was a solo home run by Nick Solak in the second inning. In that same inning, the Rangers got their only other run off Ryu on a broken-bat single by Leody Taveras.

As Ryu put up zeroes the rest of his day, his Blue Jays teammates failed to provide him any support. It was only in the top of the eighth inning, after Ryu's day was finished, that they got a run back.

Ryu couldn't have scripted a better start to the game, as he struck out the side in the bottom of the first: Isiah Kiner-Falefa looking, followed by David Dahhl and Joey Gallo swinging.

But Ryu quickly ran into trouble in the second inning. Cleanup Solak drilled an upper-deck home run to left field to lead off that frame, after Ryu threw a fastball right down the middle at just 88.7 miles per hour.

After one out, Jose Trevino reached with an infield single. Shortstop Marcus Semien made a nice grab ranging to his right, but first baseman Vladimir Guerrero Jr. was unable to dig out a low throw that could have been caught with a better stretch.

Following a groundout, Taveras broke his bat after getting jammed on an inside curveball, but still managed to dump the ball into shallow right field to cash in Trevino. 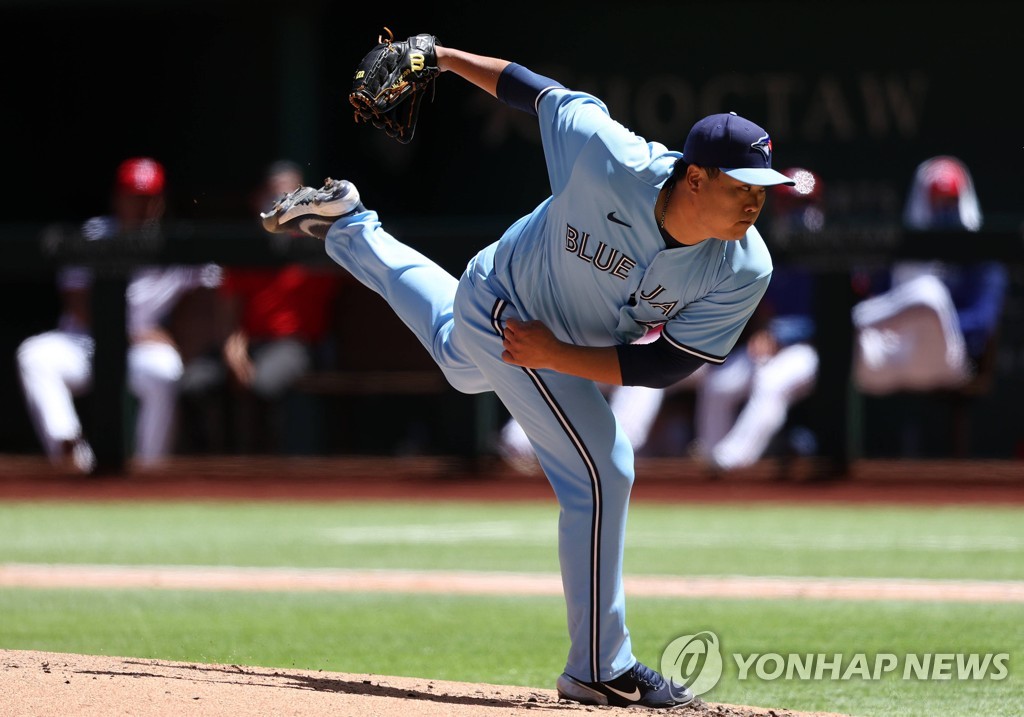 Ryu retired the next eight batters, while his Blue Jays teammates failed to give him any run support. Their best opportunity came in the top of the fifth, with one out and bases loaded against starter Kyle Gibson.

Cavan Biggio grounded into an inning-ending double play, though. His sharply-hit grounder up the middle went right at shortstop Kiner-Falefa, who was standing almost directly behind the bag in a shift.

Ryu pitched around a one-out double by Charlie Culberson in the bottom fifth, and made quick work of the Rangers in the sixth, when he retired the side on 10 pitches.

Ryu gave up back-to-back singles to begin the seventh, but got out of the jam unscathed with a combination of sleek defense and crafty pitching.

With runners at first and second, Taveras laid down a bunt toward first base side. The charging Guerrero barehanded the ball and threw out the lead runner Trevino at third base -- with the initial safe call getting overturned after a lengthy video review. 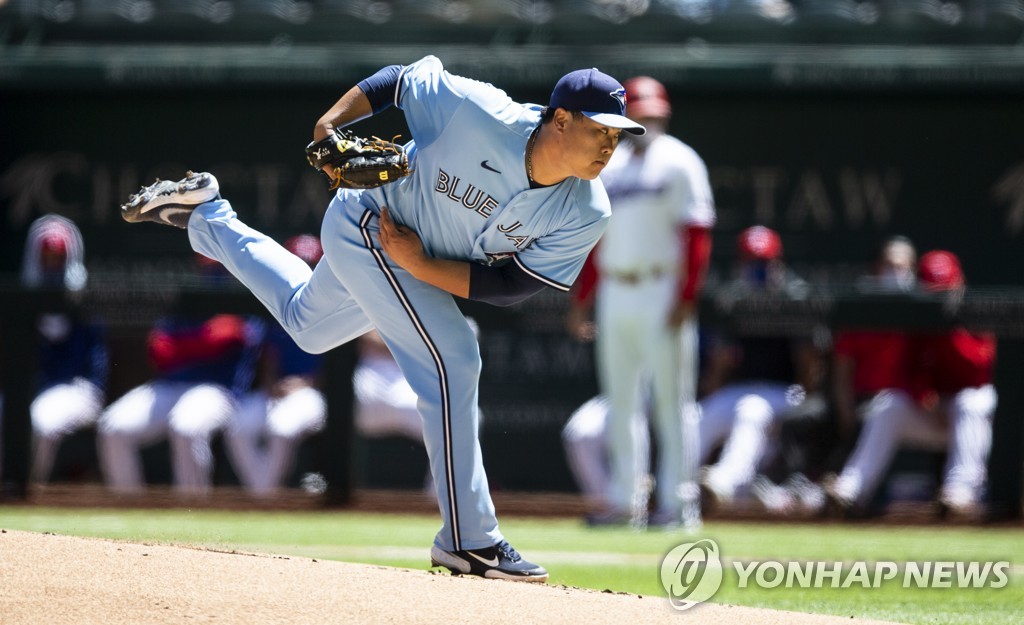 Ryu then struck out Culberson after going down 3-1 in the count, and retired Kiner-Falefa on a groundout.

And moments after Ryu received pats on his back for the work well done, signaling his day was over, Semien led off the top eighth with a solo home run to cut the deficit to 2-1.

But the Blue Jays couldn't get any closer and dropped their second straight game against the Rangers.

Ryu is slated to make his next start against the New York Yankees, either Monday or Tuesday, at TD Ballpark in Dunedin, Florida. The Blue Jays aren't being allowed to play in Toronto due to travel restrictions in place during the coronavirus pandemic, and will play early home games in Dunedin, their spring training site. 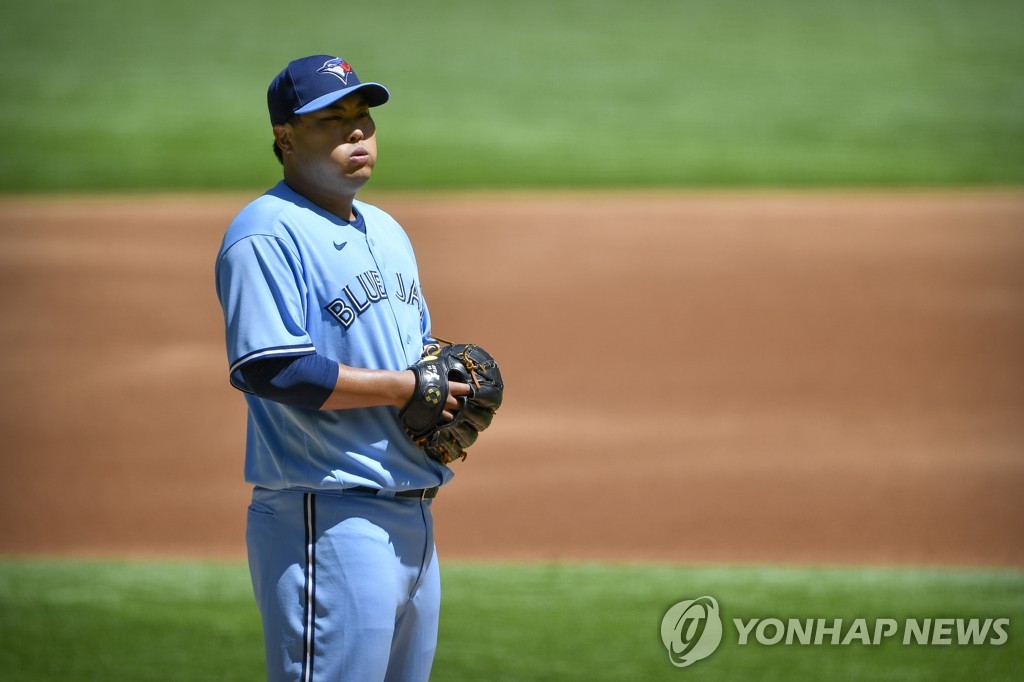