SEOUL, April 8 (Yonhap) -- South Korea's state pension operator reduced the number of listed firms in which it has a stake of 5 percent or more in the first quarter of the year, a financial information provider said Thursday.

The National Pension Service (NPS) owned 5 percent or more of 261 listed companies as of Wednesday, down 12 firms from three months earlier, according to FnGuide.

The combined market value of the NPS stakes in those corporations stood at 167.6 trillion won (US$150 billion), up 4.4 percent from the end of December last year.

The pension operator cut its stakes in 127 listed firms in the three-month period, while jacking up shareholdings of 68 businesses. Its stakes in 66 firms remained unchanged.

The fall in the number of big-stake firms came as the NPS lowered its exposures to semiconductor and chemicals manufacturers.

The NPS stake in top-cap Samsung Electronics Co., the world's No. 1 memory chipmaker, decreased to 9.99 percent from 10.69 percent over the cited period, with its interest in chip giant SK hynix Inc. dropping to 9.97 percent from 10.97 percent.

In contrast, the NPS raised its stake in No. 2 automaker Kia Motors Corp. to 8.76 percent from 8.43 percent. Its shareholdings of display titan LG Display Co. rose to 5.34 percent from 5.08 percent.

The NPS, the largest institutional investor in South Korea, currently has more than 600 trillion won under its management, making it one of the biggest pension operators in the world. 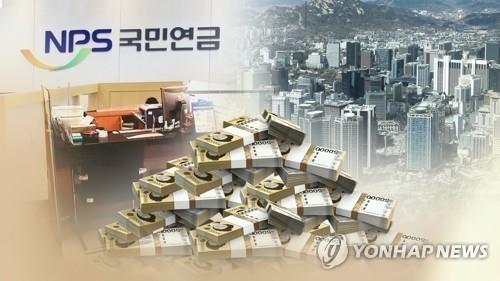