SEOUL, April 8 (Yonhap) -- South Korea's health authorities on Thursday said they will resume administering AstraZeneca vaccines one day after suspending the vaccination program for certain groups over its safety, saying they will officially decide the issue over the weekend.

The Korea Disease Control and Prevention Agency (KDCA) stressed the need to continue with the nationwide inoculation program as the benefits of administering the vaccines outweigh the risks. 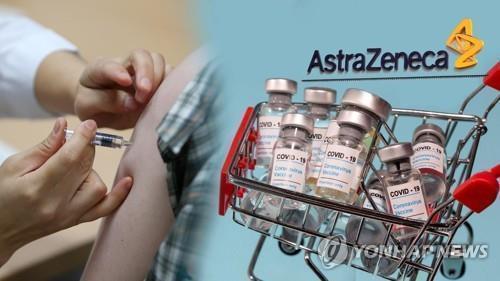 The KDCA said a team of outside experts will thoroughly review the latest rare cases of blood clots from both home and abroad, and announce the result over the weekend.

The European drug safety agency, the European Medicines Agency (EMA), is also due to announce the results of a review on whether some cases of blood clotting in adults are linked to the AstraZeneca shot.

Controversies have arisen globally over the efficacy and side effects of AstraZeneca products, also causing some delays in the country's vaccination campaign.

Since the country started its vaccination program on Feb. 26, a total of 1,075,574 people have been given COVID-19 vaccine shots here, including 35,860 the previous day. Around 2.06 percent of the total population was inoculated.

Despite the planned resumption of AstraZeneca vaccine use, there is still public distrust over the product, which may strain the country's vaccine rollout plan, under which it aims to create herd immunity by November.

According to the KCDA, a total of 10.6 million AstraZeneca jabs are scheduled to be administered here by the end of June, which accounts for some 59 percent of injections of some 18 million doses in total in the country by that time.