Under Kim's leadership, the party renamed itself from the United Future Party to the current moniker and took other face-lifting measures in efforts to recover public trust and lure back voters.

Kim is widely credited with steering the PPP to the landslide victory in Wednesday's by-elections for the Seoul and Busan mayoral seats against the ruling Democratic Party.

In his farewell press conference, Kim urged the party to keep up innovation efforts.

"If the PPP mistakes the latest election victory as their own, instead of that of the people, and slows down innovation ... the very precious opportunity for the change of the government (and reclaiming the presidency) as well as the recovery of people's livelihoods will disappear," Kim noted.

After his departure, floor leader Rep. Joo Ho-young will take over as an acting chairman of the interim leadership panel until new leaders take office, possibly in May. 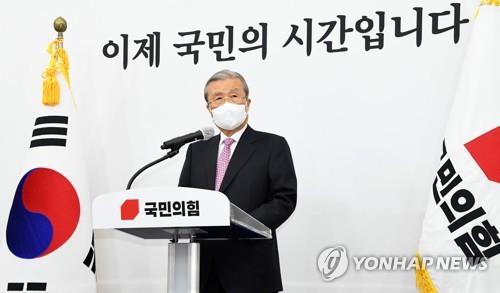