SEOUL, April 8 (Yonhap) -- More than 80 percent of South Koreans share the view that the Moon Jae-in government needs to recalibrate the direction of its key state administration policies, a poll showed Thursday.

According to the poll of 1,004 people earlier this week, 86 percent said the Moon government's policy direction should be partially or entirely changed after Wednesday's mayoral by-elections in Seoul and Busan. 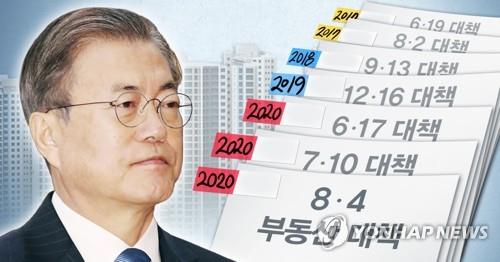 Only 5 percent agreed to the view that the government's policy direction should be maintained.

The poll was jointly conducted by four local pollsters -- Embrain Public, KSTAT Research, Korea Research International and Hankook Research -- from Monday to Wednesday and released after opposition candidates won landslide victories in the Seoul and Busan by-elections, due mainly to growing public discontent about a recent surge in rents and housing prices.

Views that the incumbent government has been doing very well or well with its real estate policies were shared by 2 percent and 13 percent, respectively.

Moon's five-year term is to end in May next year. The poll has a margin of error of plus or minus 3.1 percentage points, with a confidence level of 95 percent.

Asked to pick issues the Moon government should focus on for the remainder of its term, 29 percent cited economic revitalization, followed by stabilization of the real estate market (24 percent), anti-COVID-19 measures and securing of vaccines (23 percent), cooperation with opposition parties (10 percent) and welfare and distribution policies (7 percent).