SEOUL, April 12 (Yonhap) -- The music video for the BTS megahit "Dynamite" has earned 1 billion views on YouTube, becoming the group's third song to reach the milestone, their agency said Monday.

"Dynamite," the first song by a Korean act to reach No. 1 on Billboard's main singles chart, hit 1 billion views at around 5:46 p.m. Monday, according to Big Hit Music.

The music video, which was released at the same time as the song on Aug. 21, earned 100 million views in 24 hours and 30 minutes, the shortest time for a BTS video. By March 10, it had racked up 900 million views.

"DNA" and "Boy With Luv" are the other BTS music videos that have surpassed the 1 billion mark, with over 1.2 billion and 1.1 billion views, respectively. 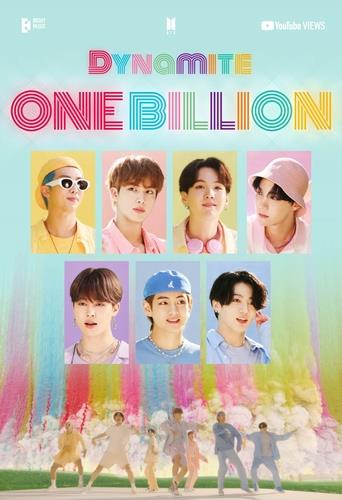