In the worst case scenario, the country could suffer a supply shortage of COVID-19 vaccines amid growing woes over the onset of the fourth wave of the pandemic.

The country's health authorities have been struggling to alleviate safety concerns over AstraZeneca vaccines, whose supply makes up about 60 percent of the country's vaccine rollout by the end of June. 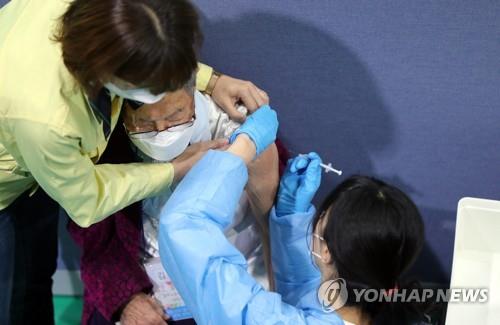 South Korea earlier put the use of AstraZeneca's vaccine for people under age 60, special education instructors and school nurses on hold, after the country reported three cases of blood clots among recipients of the jabs, with two of the patients in their 20s.

The use of AstraZeneca's vaccine resumed Monday, except for those aged 30 and below.

This week, the country was again taken aback by the news that the United States would pause the use of Johnson & Johnson's Janssen products, dealing a further blow to the global vaccination campaign.

The Seoul government has planned to receive 6 million doses of Johnson & Johnson vaccine. The bottles are scheduled to be provided in the third quarter.

The Korea Disease Control and Prevention Agency (KDCA) said there is currently no change in arrivals of Johnson & Johnson products during the second and third quarters, stressing that the pause will not deal a setback to the country's vaccination campaign.

The KDCA earlier announced that it has secured enough coronavirus vaccines to inoculate 79 million people, more than its 52 million population, seeking to complete the vaccination of 12 million people by end-June and aims to achieve herd immunity by November.

The vaccine supply glitch, coupled with growing public concerns over the safety of vaccine products, could further delay the country's vaccination campaign amid rising virus cases.

South Korea's daily new coronavirus cases stayed in the 600s for the second straight day Friday as the country's virus fight is at a critical juncture of bracing for another wave of the pandemic.

Friday's daily caseload was down from 698 on Thursday and 731 on Wednesday, which marked the highest since Jan. 7.

Since the country started its vaccination program on Feb. 26, a total of 1,379,653 people, or about 2.65 percent of its population, have been given COVID-19 vaccine shots.