SEOUL, April 19 (Yonhap) -- South Korea has confirmed 70 more cases of contagious variants of the new coronavirus, bringing the total to 449, according to health authorities Monday, amid concerns that the country's virus battle may be exacerbated by the more transmissible viruses.

The Korea Disease Control and Prevention Agency (KDCA) said the 70 people were confirmed to have been infected with three kinds of variants that are known to be more transmissible over the past week.

Of them, 35 people were local infections and 35 were imported cases, the KDCA said. 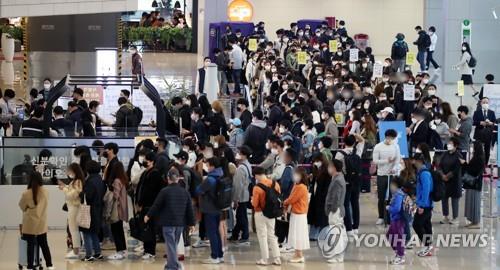 By nationality, 41 of them are South Koreans and 29 are foreigners, the authorities said.

According to the KDCA, 64 cases are the Britain-originated variant, followed by five from South Africa and one from Brazil.

The authorities have said they remain vigilant against the possibility that highly transmissible new variants from Britain, South Africa and Brazil could lead to another uptick in virus cases here.

The recent emergence of several COVID-19 mutations has complicated the global fight against the pandemic because they are more transmissible than the original one.

Adding to woes, a new variant originating from India, which has a so-called double mutation, was first reported last week. Not much information has been provided yet on the extensity.

South Korea has extended the ban on passenger flights arriving from Britain, which has been in place since Dec. 23, until Thursday to block the new virus variant that was first identified in Britain.

Also, all entrants, both foreigners and locals, have been required to present certificates of negative polymerase chain reaction (PCR) tests taken within 72 hours of their departure for South Korea since late February.