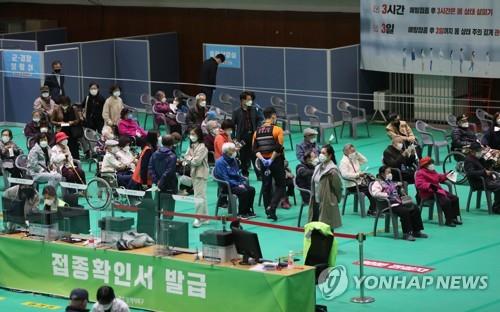 The Korea Disease Control and Prevention Agency (KDCA) confirmed that AstraZeneca vaccines for 1 million people will arrive in the country in May and those for another 2.5 million people in June.

The vaccines will be the first two batches provided under a direct contract for 10 million people between the British-Swedish pharmaceutical giant and the Seoul government, the KDCA said.

The country's health authorities have been struggling to alleviate safety concerns over AstraZeneca vaccines amid mounting concerns over a possible supply shortage.

The planned shipment also comes as the authorities have been speeding up the rollout of AstraZeneca COVID-19 vaccines to members of the general population.

Earlier, the Seoul government said it has secured enough vaccines to administer to 79 million people, more than its 52 million population.

A series of mishaps in securing COVID-19 vaccines as scheduled spawned concerns that the country's nationwide inoculation scheme may be delayed, which in turn may put its goal to create herd immunity by November in jeopardy.

Last week, the country was again taken aback by the news that the United States would pause the use of Johnson & Johnson's Janssen products over blood clotting, dealing a further blow to the country's vaccination campaign.

South Korea has planned to receive 6 million doses of the Johnson & Johnson vaccine. The bottles are scheduled to be provided in the third quarter.

The country added 532 more COVID-19 cases Monday as daily cases fell back below 600 for the first time in six days, with the total caseload at 114,646, the KDCA said.