SEOUL, April 22 (Yonhap) -- Having had a highly frustrating year without her yearly regenerative trips to famous overseas tourism spots due to the COVID-19 pandemic, 39-year-old office worker Kim Hyun-joo decided it's time to chill out and splurge a bit.

One weekend this April, she went on a tour of an upscale shopping mall east of Seoul, with her eyes set on buying not one but two handbags from imported luxury leather goods brands.

It took less than an hour for Kim to emerge from the crowded shopping mall with the day's haul -- two small leather bags, one each from a French and an Italian luxury fashion house, totaling more than US$5,000.

"I had some extra money saved after my planned trips to Germany and Thailand were canceled last year due to the pandemic," Kim said.

"As it seems there's little chance to be able to go abroad this year as well, I decided to spend the money here at home," she said, content with the purchases.

As the prolonged pandemic has constrained the everyday lives of people for more than a year, more South Koreans, stripped of social activities and recreational trips, are looking for comfort in what many labeled as "revenge spending." 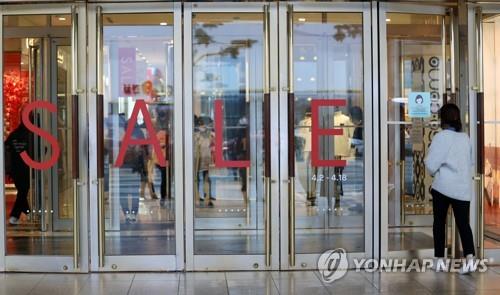 According to recent data released by Rep. Park Kwang-on of the ruling Democratic Party, spending in March registered for the credit cards issued by Shinhan Card, a major credit card company, came to 13.5 trillion won (US$12 billion), accounting for a growth of 16.5 percent from a year earlier.

It was the biggest on-year growth rate in the card company's monthly performance since the onset of the COVID-19 pandemic, signaling a robust recovery of consumption following a pandemic-constricted year.

The March figure was even bigger than the monthly card spending of 11.3 trillion won recorded in February 2020, when consumption was yet to come under the influence of COVID-19.

The fast-recovering consumption has been a boon particularly to high-end luxury goods makers and upscale retail chains, a phenomenon attributed mainly to splurging by young consumers in their 20s and 30s.

Sales of luxury fashion goods by high-end fashion houses, such as Chanel, Louis Vuitton and Christian Dior in South Korea, remained unscathed in 2020 despite the pandemic-wrought economic difficulties, posting a total of $12.54 billion last year in comparison with 2019's $12.52 billion, according to a research firm, Euromonitor.

The corresponding sales for the global market dived 19 percent last year from a year earlier, driven mainly by contracted sales in the United States, Japan, France and other European countries, according to the research firm.

The prevalence of revenge spending sprees captured media spotlights this month as long queues of young consumers formed almost on a daily basis in front of Chanel stores across Seoul, hours before the shop's opening time.

About 100 people were already standing in line as of 8 a.m. last Wednesday in front of the Chanel store on the ground floor of Lotte Department Store in central Seoul, more than two hours ahead of the shop's opening, for the increasingly tough competition to procure models of their choice as demand increased.

Some arrived well before 6 a.m. for the "open run," equipped with foldable fishing chairs to get through more than four hours of waiting outdoors, to buy what have become scarce products amid the revenge spending phenomenon. 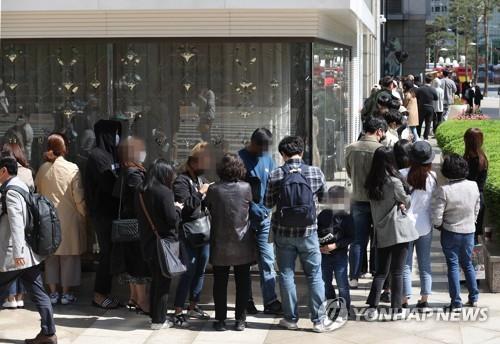 As the luxury brand is embracing a sharp increase in visiting customers, any unprepared consumer's spontaneous attempt to have a tour of a Chanel store on any given weekend became all but impossible due to long waiting lists.

Many interpret the revenge spending sprees as a sign of reviving consumer sentiment on the back of the kick-off of the national COVID-19 vaccination campaign in late February, as well as income growth seen among people of certain income brackets.

"The overall economy was in bad shape due to COVID-19, but 30 percent of the country's households, which account for 6 to 7 million, saw their income expand further despite the pandemic," said Seo Yong-gu, professor of business administration at Sookmyung Women's University. "Their revenge consumption, (spurred by) the restriction of overseas trips, heated up the luxury market," he said.

Others warned that the phenomenon may be a clear sign of growing income disparity between the haves and the have-nots in the wake of the pandemic.

In the year 2020, the number of employed people in South Korea reached 26.9 million, 218,000 fewer than the previous year. It marked the biggest on-year fall in the number of employees since the 1997-98 Asian financial crisis as the pandemic cast a heavy cloud on the job market.