SEOUL, April 26 (Yonhap) -- An outpouring of support and congratulatory comments followed the news of South Korean actress Youn Yuh-jung's historic winning of an Oscar on Monday.

Youn won best supporting actress at this year's Academy Awards for her performance in the film "Minari," becoming the first South Korean to win an acting Oscar.

"It is like much-needed rain for the people who are having a hard time amid the COVID-19 pandemic," the ruling Democratic Party (DP) said in a statement.

The movie has "made history yet again" after the Oscar winning last year by Bong Joon-ho with "Parasite," the statement read, adding, "Youn's performance moved the hearts of global moviegoers and left lasting impressions."

The party implored the public to "overcome the current (health) crisis," just like the movie's protagonists who, "despite all the anxiety and confusion, do not give up and challenge themselves till the end."

The opposition People Power Party also congratulated the 73-year-old actor on the win, saying that her achievement -- and her lifelong pursuit of and dedication to acting -- gave many Koreans "energy and vitality to ride out the current hardship."

The film, it said, showed "the life of the generation ahead of us" that successfully rebuilt the nation from the war rubble, with the spirit symbolized by the plant "minari" that "exhibits great life force and thrives wherever it takes root." 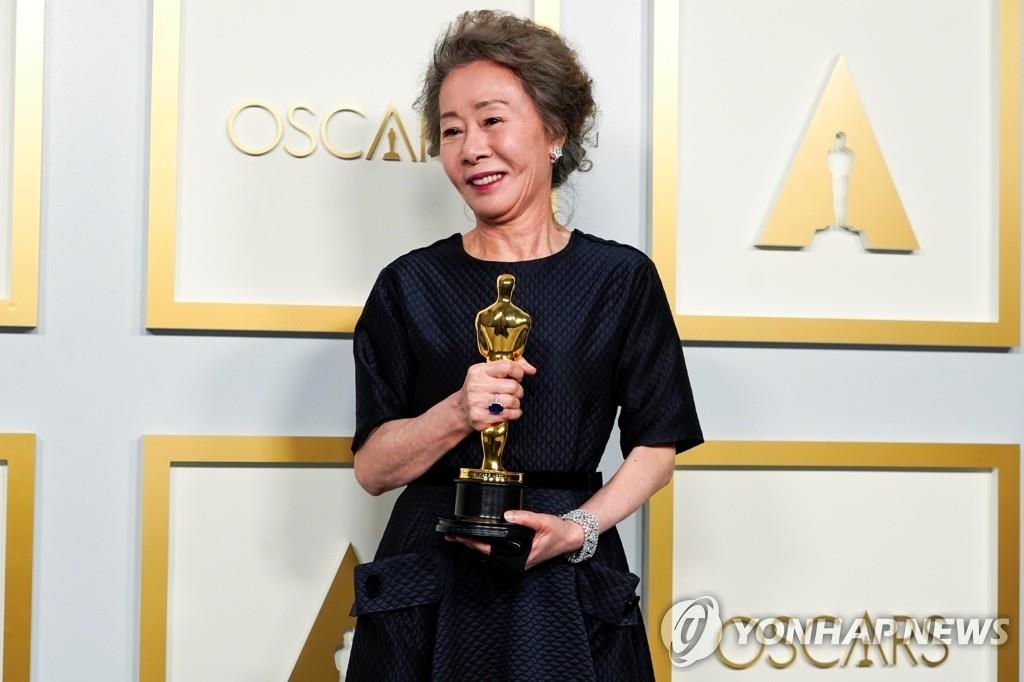 Youn's achievement has also been widely celebrated and cheered by many South Korean actors who grew up watching her performances.

Choi Woo-sik, who played the son of a poor family in the Oscar-winning "Parasite," said it was "touching" to watch her win the award and he hoped to "continue seeing her performance in many more movies to come."

Award-winning actor Jeon Do-yeon said through her management agency that she "had never doubted" that Youn would win an Oscar and was so "proud" of her. Jeon won Best Actress at the 60th Cannes Film Festival for her performance in Lee Chang-dong's "Secret Sunshine" in 2007, becoming the first Korean ever to win an acting award from the festival.

"Impossibility is not a fact but merely an opinion," actor Lee Byung-hun wrote on his Instagram account, alongside a photo of Youn from the Oscar night. Lee appeared in such Hollywood films as "G.I Joe: Retaliation" in 2013.

The viewership rating for Youn's nabbing the Oscar, which was broadcast live exclusively on the cable channel TV Chosun on Monday morning, peaked at 7.88 percent, more than three times the rating of 2.16 percent of the same time a week ago.