SEOUL, April 28 (Yonhap) -- The defense ministry on Wednesday began administering AstraZeneca's coronavirus vaccine to service members aged 30 and older, it said, amid growing concerns over the spread of the virus in barracks.

Authorities plan to complete giving the first vaccine doses to 126,000 troops over the age of 30 in the next two weeks in the full-fledged launch of a vaccine campaign in the military.

Receiving the vaccine is voluntary, but over 80 percent of the troops subject to the vaccination have agreed to take it, the ministry said.

The military will operate a task force in collaboration with the Korea Disease Control and Prevention Agency to monitor side effects after vaccinations, it said.

To minimize impact on the readiness posture, the military will divide service members at the same unit into different groups to avoid a possible loophole in carrying out missions.

"The vaccination is expected to greatly contribute to our antivirus efforts as it would significantly reduce the risk of infection among commuting officers and civilian employees," the ministry said in a release.

Defense Minister Suh Wook called for a "safe and systematic" inoculation to achieve herd immunity at an early date.

South Korea began a nationwide vaccine campaign in February, but among the military population, only around 2,400 military doctors and other health care workers had received the vaccine shots.

Consultations are under way to decide on a separate inoculation plan for service members under age 30, according to ministry spokesman Boo Seung-chan.

The military has reported 777 coronavirus cases among its population so far.

On Wednesday, the ministry said an Army officer, a cadet and two airmen have additionally tested positive for the new coronavirus.

The Army officer based in Seoul was confirmed to have contracted COVID-19 after coming into contact with a civilian who tested positive earlier, while the cadet in the southwestern city of Iksan was found to be infected after a family member tested positive.

In the central city of Chungju, an airman tested positive upon return from vacation, and another airman in the southern city of Sacheon was found to have contracted the virus after a series of infections were reported at his base.

The total number of infections reported at the Sacheon unit rose to 10. 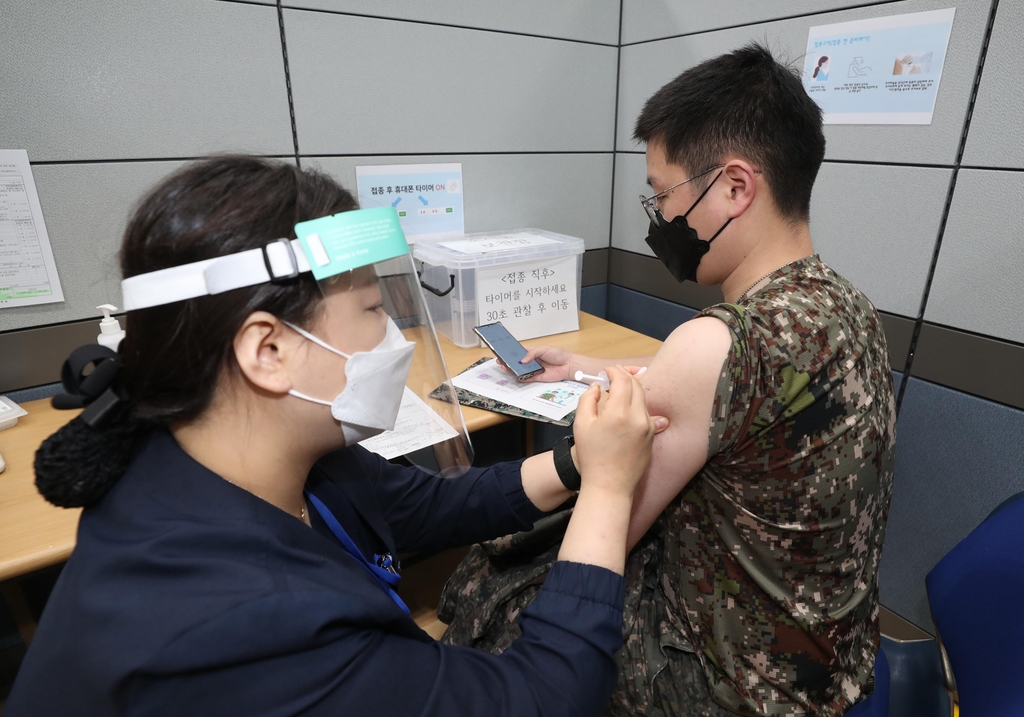