GWANGJU, May 3 (Yonhap) -- Football star Ki Sung-yueng has been summoned by police and questioned on charges of illegally buying and using farmland in the southwestern city Gwangju, police said Monday.

Ki, the captain of FC Seoul in the K League 1, was grilled as a suspect by investigators at the Gwangju Metropolitan Police Agency for three hours, beginning at 2 p.m. on Sunday, the police agency said.

Ki and his father, Ki Young-ok, have been booked without detention on charges of violating the Agricultural Land Act and the National Land Planning and Utilization Act after their joint purchases of about 10 plots of land, including farmland, all worth several billions of won, in western Gwangju, 330 kilometers south of Seoul, between 2015 and 2016.

They are suspected of falsifying documents on farming plans and altering part of their farmland into a parking lot for crane trucks.

In South Korea, people intending to buy farmland are obliged to present a farming business plan that contains their farming history, purposes of farming, farm tools and other details under the Agricultural Land Act. 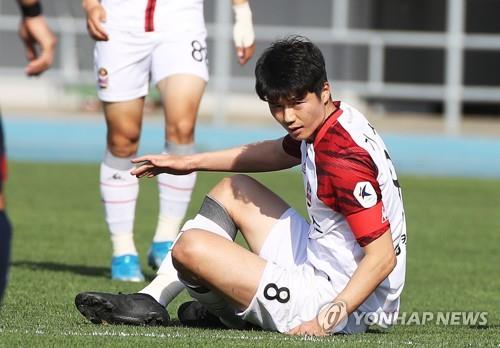 Ki and his father reportedly earned a huge profit after reselling parts of their land to contractors of a private park and apartment complexes early this year, sparking suspicion of property speculation.

During his questioning on Sunday, Ki reportedly said he had just sent money to his father after the latter said the land was needed for the construction of a football academy.

The FC Seoul midfielder denied charges of property speculation, police said, adding an investigation was still under way based on their statements.

In late April, Ki said in an Instagram post, "I am truly sorry to have caused a stir though inadvertently. It's all my fault resulting from my ignorance."