The Rangers announced on Sunday that Yang will start the third game of the four-game series against the Minnesota Twins at Target Field in Minneapolis, Minnesota, starting Monday.

He will replace starting pitcher Kohei Arihara, who has complained of a callus on his right middle finger.

It will be the 33-year old pitcher's first starting game in Major League Baseball since he signed a minor league contract with the Rangers in February.

After he joined the big league roster last week, he appeared in two games as a relief pitcher, allowing two runs in 8 2/3 innings with an ERA of 2.08. 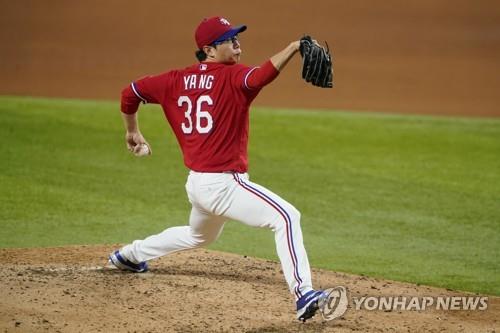 After 14 successful seasons in South Korea with the Kia Tigers of the Korea Baseball Organization, Yang received an invitation to spring training and joined the Rangers on a minor league deal in February.

Since the 2021 season kicked off in early April, Yang had been at the alternate training site with the so-called taxi squad, which refers to a temporary roster for reserve players and top prospects who can be called up to the big leagues, since the 2021 season started in early April. It was designed to help major league clubs move their players up easily from Triple A in the minor leagues, whose 2021 season opening has been pushed back due to the COVID-19 pandemic.

Early last week, the Rangers called up Yang to the big league roster, purchasing his contract from the alternate training site.

Under the terms of his contract, Yang will make US$1.3 million if he reaches the big leagues and can make up to $550,000 more in incentives.