SEOUL, May 3 (Yonhap) -- North Korea has expressed its intention not to participate in Asian qualifiers for the 2022 Qatar World Cup, set to take place in South Korea in June, a football governing body here said Monday.

The PRKFA reportedly cited fears of coronavirus infection among the reasons for its decision not to travel to South Korea next month. 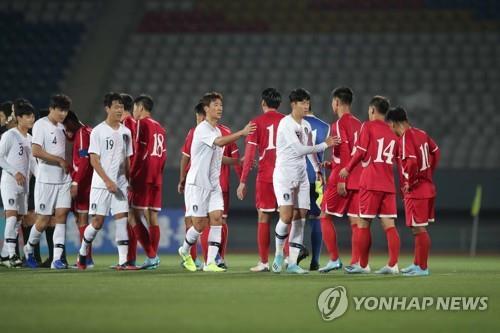 The two Koreas belong to Group H in the second round of Asian qualifiers for the 2022 World Cup, along with Turkmenistan, Lebanon and Sri Lanka. There are five nations in each of the eight groups, and the eight group winners and the four-best runners-up will advance to the third round.

The second round began in September 2019 and was supposed to resume in March 2020 after being delayed due to the novel coronavirus pandemic. But most of the second round matches have been postponed again to June due to the pandemic.

Against such a backdrop, the AFC has given up the previous home-and-away format and decided that five nations in each group are to gather in one country to finish all of their remaining matches from May 31 to June 15. The AFC then announced on April 12 that South Korea was chosen as the host of the remaining Group H matches.

The two Koreas played to a 0-0 draw at a virtually empty Kim Il Sung Stadium in Pyongyang on Oct. 15, 2019, in their first Group H match.

South Korea are scheduled to play against Turkmenistan on June 3, against North Korea on June 7, against Sri Lanka on June 11 and against Lebanon on June 15.

An official from the KFA said the AFC is expected to ask North Korea to reconsider its decision not to travel to South Korea, because there is still some time left before the centralized matches kick off here.