(ATTN: CORRECTS typo in headline; UPDATES with additional background in 11-13)
By Byun Duk-kun

WASHINGTON, May 3 (Yonhap) -- U.S. Secretary of State Antony Blinken urged North Korea on Monday to return to the negotiating table, saying his country seeks to make practical progress toward the denuclearization of the Korean Peninsula through diplomacy.

The call comes after North Korea threatened the U.S. will face "worse and worse crisis."

"I hope that North Korea will take the opportunity to engage diplomatically and to see if there are ways to move forward toward the objective of complete denuclearization of the Korean Peninsula," the top U.S. diplomat said in a joint press conference with his British counterpart, Dominic Raab.

Blinken is on a trip to London, where he is attending the Group of Seven (G7) Foreign and Development Ministers' Meeting. 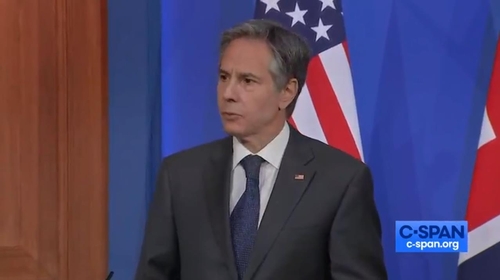 On Sunday (Seoul time), North Korea said the U.S. will find itself in a "very grave situation."

Pyongyang took issue with U.S. President Joe Biden's recent address to Congress, in which he said the U.S. will work with its allies to denuclearize the Korean Peninsula through "diplomacy, as well as deterrence."

Blinken's remarks also come after the U.S. completed a comprehensive review of its North Korea policy.

He said it is up to North Korea decide whether to engage, but said new U.S. policy toward North Korea is centered around diplomacy.

"And so we will look to see not only what North Korea says but what it actually does in the coming days and months. but we have, I think, a clear, a very clear policy that centers on diplomacy and it is I think up to North Korea to decide whether it wants to engage or not," said Blinken.

"What we have now is a policy that calls for a calibrated, practical approach that is open to and will explore diplomacy with North Korea to try to make practical progress that increases security of the United States, our allies and our deployed forces," he added.

"It's aimed at solutions. It's aimed at ultimately achieving the complete denuclearization of the Korean Peninsula," Sullivan said Sunday in an interview with ABC News.

"And we're prepared to engage in diplomacy towards that ultimate objective, but work on practical measures that can help us make progress along the way towards that goal."

North Korea has stayed away from denuclearization negotiations since leader Kim Jong-un's second summit with Donald Trump in Hanoi ended without a deal in February 2019. The first Trump-Kim summit was in Singapore in June 2018.

White House spokeswoman Jen Psaki has said the new North Korea policy of the Biden administration does not seek to achieve such a "grand-bargain" agreement with North Korea, which had apparently been sought by the former Trump administration, nor rely on so-called "strategic patience," referring to the wait-and-see approach of the former Barack Obama administration.

"We wanted to take account that history to look at what works, what doesn't work and how we could have an effective policy to advance the goal that we have, which is the complete denuclearization of the Korean Peninsula," he said.

"Second, we did it in a deliberate way because we wanted to make sure that we were very actively consulting with all of the concerned countries, starting with our close allies South Korea and Japan," added Blinken.

Blinken and his G7 counterparts were set to discuss the North Korea issue later when they attend a working welcome dinner, according to his daily schedule from the State Department.