According to the sources, the Seoul Western District Court rejected Thursday an injunction sought by several conservative organizations, including the New Paradigm of Korea, to ban the sales of the eight-volume memoirs, titled "With the Century."

The book was printed here by a local publishing company on April 1 for the first time since they were published by the North Korean regime in the early 1990s.

The memoirs, mainly about Kim's anti-Japanese fight, have sparked controversy as it is known to contain fabricated and glorifying information about his life. The North's national founder is the grandfather of current leader Kim Jong-un. 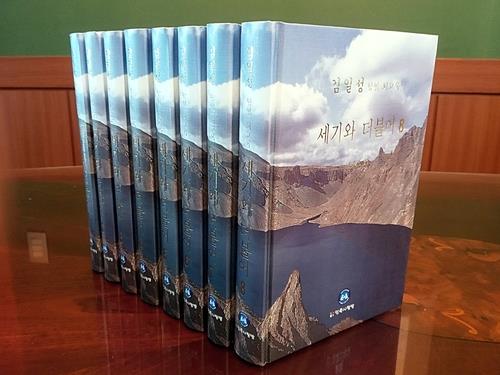 The plaintiffs have claimed that the distribution of the memoirs "glamorizing the Kim family" infringes on human rights and harms the dignity of South Koreans as well as the country's democracy. They also argued that it violated the Constitution and the National Security Act, which regulates propaganda materials related to the North.

But the court dismissed their claim, saying that the plaintiffs had no right to file an injunction because the book did not directly involve them and that their rights have not been violated by the book's content.

"It seems the plaintiffs wish to ban the memoirs, concerned that it could harm the rights of fellow South Koreans, but they cannot seek an injunction on behalf of other citizens," the court said.

The plaintiffs appealed the ruling right after it came out.

They plan to file an injunction again with the families of 1950-53 Korean War abductees, in line with the court's decision that only those who are directly impacted by the North regime can take legal action in cases like this.

Several families of the abductees have indicated willingness to take part in the suit, Doe Tae-woo, an attorney representing the plaintiffs, said.