SEOUL, May 16 (Yonhap) -- A subcontract worker at a cement factory in the eastern port city of Donghae has died after an overhead crane fell on him in yet another industrial incident, authorities said Sunday.

According to Gangwon Fire Headquarters and Donghae Police Station, the 63-year-old crane driver was hit by an overhead crane that fell from 10 meters above at a cement factory in Donghae, 279 kilometers east of Seoul, at 11:42 p.m. Friday. He was moved to a hospital but died.

The accident reportedly occurred while he was moving subsidiary materials to a conveyor belt with a crane.

The worker subcontracted by SsangYong C&E was reportedly working on the third shift of the day in a team with three other workers.

Police and labor authorities were investigating the exact cause of the accident while sending the case to the National Forensic Service for more analysis.

"Deaths caused by outsourcing of danger have been repeated," said an official with the Gangwon regional branch of the Korean Confederation of Trade Unions (KCTU), the more militant of the nation's two largest labor umbrella organizations. "In order to prevent another victim, we need to thoroughly examine its cause and come up with recurrence prevention measures when a deadly accident occurs," the official stressed. 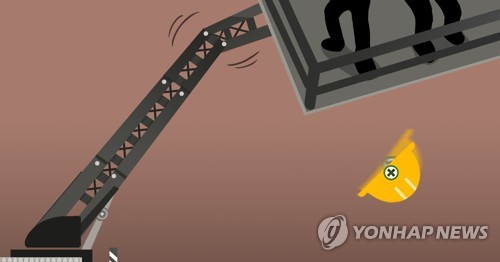