SEOUL, May 17 (Yonhap) -- The number of visitors to major amusement and theme parks across the country decreased sharply last year due to the coronavirus pandemic, data showed Monday.

According to data from the state-run Korea Culture and Tourism Institute, attendance at Lotte World in southern Seoul stood at 1.56 million in 2020, down 73.1 percent from the previous year.

Water parks suffered a sharper decline in attendance as well. Caribbean Bay in Yongin and the water park and spa at Woongjin Playdoci in Bucheon, about 50 km west of Seoul, saw guest numbers plummet 87.4 percent to 168,000 and 80.3 percent to 146,000, respectively. 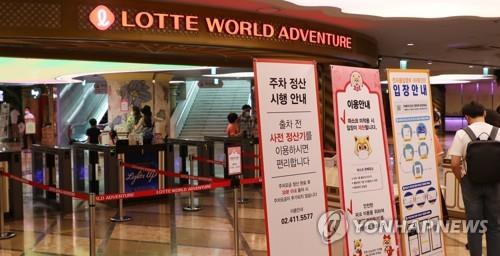 The operators of those resort facilities swung to an operating loss last year, the institute said.

The resort division of Samsung C&T, which runs Everland and Caribbean Bay, posted 426 billion won (US$376 million) in sales, down 38.8 percent from the previous year, with an 82.2 billion-won operating loss.

The number of visitors to the four major palaces in Seoul also more than halved last year, according to the data.