SEOUL, May 18 (Yonhap) -- President Moon Jae-in commemorated the anniversary of a 1980 pro-democracy uprising in Gwangju on Tuesday with a call for finding the truth behind the bloody crackdown by soldiers and recovery of victims' honor.

Thanks to "courageous" testimonies by some of those involved, "We are coming close to the truth of Gwangju," Moon wrote on his Facebook and Twitter accounts in commemoration of the May 18 Democratization Movement.

In Gwangju, 329 kilometers south of Seoul, at that time, citizens stood up against the military junta led by Chun Doo-hwan. Martial law troops and paratroopers were deployed to seal off the city and carry out a brutal crackdown on protesters.

Last week, former soldiers testified that even machine guns and snipers were mobilized to open fire on civilians, Moon pointed out.

The president also expressed his sympathy for people in Myanmar.

"We are seeing yesterday's Gwangju in today's Myanmar," he wrote, referring to the local military's violence against anti-coup protesters.

Moon recalled Jurgen Hinzpeter, a German journalist, who filmed what happened in Gwangju. His footage was delivered to Germany and broadcast, helping the outside world get to know about the tragic incident.

"I eagerly hope that Gwangju and Hinzpeter's journalist spirit will offer hope to Myanmar," he wrote. 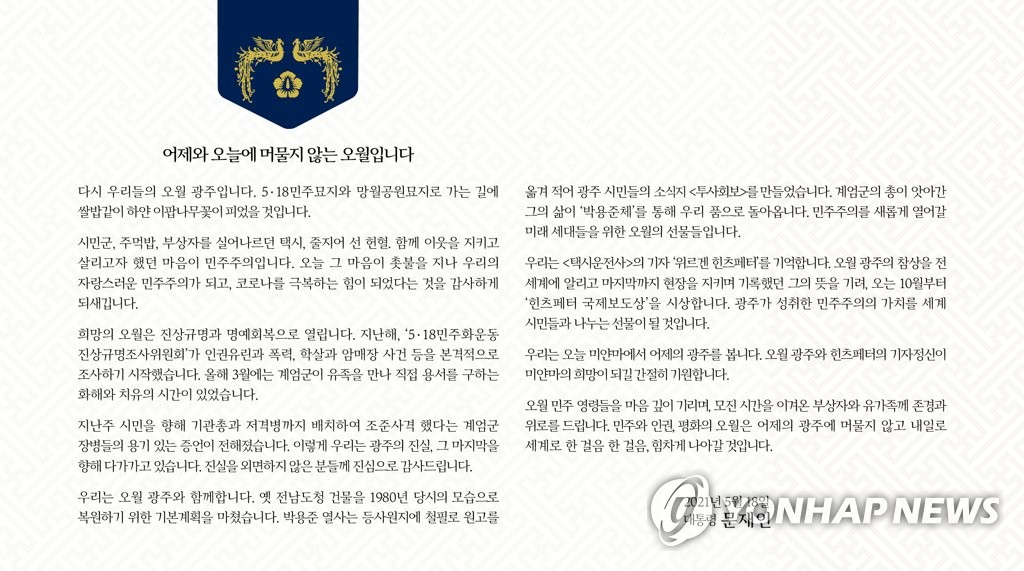