SEOUL, May 24 (Yonhap) -- K-pop superstar BTS has opened or will open additional offline pop-up stores in four Asian cities to meet rising demands for merchandise among the group's fans in the populous continent, its management agency said Monday.

A BTS Pop-up: Map of the Soul store, which offers products themed around the seven-piece band's 2020 hit album "Map of the Soul: 7," already opened in Bangkok on May 1 to run through July 25, according to Hybe IP, an intellectual property arm of K-pop powerhouse Hybe.

The BTS Pop-up: Map of the Soul stores had operated in five regions, including South Korea, the United States, Japan and Europe, for the four months through February. The store in Seoul alone garnered around 70,000 visitors over the cited period.

In Singapore, a BTS Pop-up: Space of BTS store, which focuses on everyday items and fashion products, will be launched this Friday and close on Aug. 15.

The retail shop had attracted a total of around 240,000 people in 13 cities across Japan from December last year through March this year, according to Hybe IP.

"The K-pop act's stores have made visits to fans across the globe even amid the new coronavirus pandemic," the agency said, adding that it will try to prepare more places and products through which fans can enjoy the artist's work. 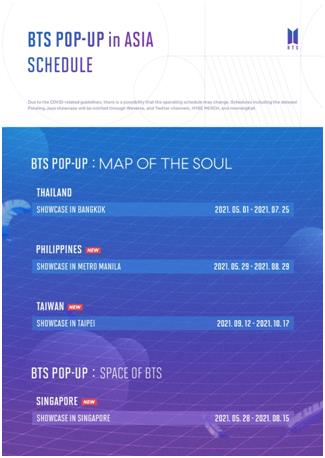